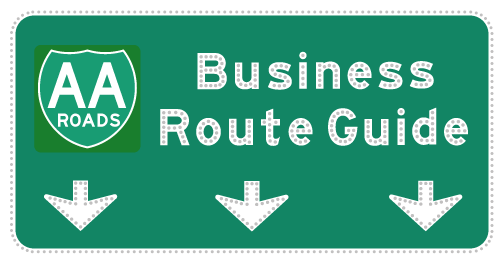 Interstate 64 is the longest primary Interstate without any business loops or spurs. Business Interstates were never assigned for the following routes:

Interstate business connections (loops and spurs) were approved by AASHTO in 1964 as a method to provide access from the Interstate superhighway to the cities and towns bypassed by the freeway. AASHTO made this decision during the height of Interstate highway system construction. While primarily geared toward U.S. Highway business routes, AASHTO Policy HO1 defines a business route as “a route principally within the corporate limits of a city which provides the traveling public an opportunity to travel through that city, passing through the business part of the city, while the regular number is used to obviate passing through the congested part of the city. This ‘Business Route’ connects with the regular numbered route at the opposite side of the city limits. ‘Business Route’ numbering shall be established by the placing of a standard strip carrying the words ‘Business Route’ on the staff above the U.S. shield.” Business routes are marked with a white on green variation of the standard tri-color Interstate shield.

As the Interstate Highway System neared completion, business routes became more prevalent. Business loops were commissioned in some areas where the U.S. route still existed as a means to entice travelers to exit and use services available in that town or city. These routes consisted of surface streets through the city center, older arterial bypasses around the city, divided highways with some grade separated interchanges and other non-limited access routes.

Several states have no Interstate business routes presently, but did at one point. These include: 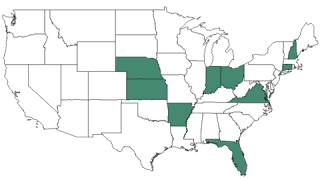 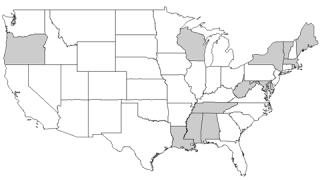 * – Maryland and New Jersey have designated Interstate Spur routes. These are not conventional Business Routes, but rather branches from a parent Interstate that are inventoried with a lettered suffix. With the exception of one sign for I-270 Spur, this collection of routes are unsigned.

Business Interstates are most often posted in the western states, across the Great Plains and in Michigan. Eastern states generally did not designate business loops, as most of the Interstates paralleled the original U.S. routes instead of directly replacing them. With the exception of mountainous areas, this left most of the U.S. highways in place, or as co-signed routes with the parent Interstate, while the former routes were redesignated as local or frontage roads. In contrast, construction of the Interstate system in the western states often directly overlaid the old U.S. highway, leaving the former road impassable or as a disconnected route. Exceptions were at cities and towns, where the freeway would shift onto a bypass around them. This often left extant segments of old U.S. Highways in place, with a business loop designation applied to them as a motorist aid to and from a business district of collection of motorists services.

Implementation and maintenance of business routes varies from state to state. States like Illinois, Michigan and Wyoming incorporate Interstate business routes within the state maintained system. These routes tend to be well signed given their status as state routes/highways. Other states like California usually transfered responsibility for business route maintenance to a local municipality when the bypass route (Interstate mainline) was completed. Local maintenance includes posting signs and replacing them as needed. Some states such as Nevada, South Dakota and Washington allow business loops to fall under local control by cities and counties while also maintaining others as state routes.

There are five basic types of business connections:

The following sections show how certain states identify and designate business routes. The 2009 Manual on Uniform Traffic Control Devices (MUTCD) for Streets and Highways provides guidance on a wide variety of standards used for roads, including business routes. Page 143 provides pertinent information about business routes: “Standard: 05 Off-Interstate Business Route signs (see Figure 2D-3) shall consist of a cutout shield carrying the number of the connecting Interstate route and the words BUSINESS and either LOOP or SPUR in upper-case letters. The legend and border shall be white on a green background, and the shield shall be the same shape and dimensions as the Interstate Route sign. In no instance shall the word INTERSTATE appear on the Off-Interstate Business Route sign. Option: 06 The Off-Interstate Business Route sign may be used on a major highway that is not a part of the Interstate system, but one that serves the business area of a city from an interchange on the system. 07 When used on a green guide sign, a white square or rectangle may be placed behind the shield to improve contrast.”

Prepared and updated by the Arizona Department of Transportation (ADOT), the State Highway System Log, provides updates on the status of all Arizona state highways, including business loops and spurs.

Arizona has studied the removal of nonessential business routes from the state highway system. ADOT Route Transfer Procedures Study from June 2012 states that “Priorities for route transfer are: … c) Existing business routes not necessary for system continuity.” Unlike some other states, Arizona generally will not sign business loops on non-state maintained roadways.

Within California, business routes are specifically designated based on the requirements specified in the following passage from the California Highway Design Manual (revised May 2012). Chapter 20 (“Designation of Highway Routes”) of the design manual indicates that by definition, a business route is a loop through a city or town rather than a spur:

With the exception of a thicker border and horizontal rule, the basic sign design for Interstate Business Loops have not changed much over the years. Occasionally states will post markers without the word Spur or Loop. Sioux Falls, South Dakota replaced the word Business with Downtown. 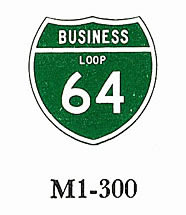 Furthermore, California has standards that are unlike those of other states. Joe Rouse provided the official policy on business route signing in California from the state Traffic Manual:

The ROUTE ## BUSINESS sign may be used to direct motorists to an established U.S. or State numbered business route or an Interstate business loop from a State highway. The plate should be installed below an advance ground-mounted directional sign. The sign may be placed separately in advance of the business route if it is necessary. A NEXT RIGHT/LEFT message may be used on expressway and conventional highway installations. A NEXT EXIT message may be used on freeways.

The BUSINESS plate, in appropriate color, may be used to indicate an alternate route that branches from a US or State sign route, passes through the business district, and rejoins the route. The plate should be placed above the ROUTE SHIELD sign. The INTERSTATE BUSINESS LOOP sign should be used on an interstate business loop. The ROUTE ## BUSINESS plate should be used for advanced signing on U.S. or State sign routes.

Research from the former Highways of Colorado web site by Matt Salek revealed that the CDOT route logs inventory Interstate Business Loops and Spurs only if they are not concurrent with another numbered highway. An exception occurs with the Grand Business Loop for I-70, which overlaps with U.S. 6 & 50 to the west and U.S. 6 again to the east. Additionally CDOT also has a system of unmarked business spurs, which act as minor or major collectors between the parent freeway and a city or town.

The Michigan Department of Transportation defines business routes as follows:

All Interstate business routes within the Land of Enchantment are inventoried on the New Mexico Department of Transportation (NMDOT) Posted Route – Legal Description lists. Routes are identified with a unique number separate from Interstates 10, 25 and 40. 11 total routes remained under state control as of March 16, 2010.

Within the state of Utah, Off-Interstate Business Spurs must:

This policy explains why most Utah off-Interstate business route are found in the less populated areas of the state and generally not among the communities of the Wasatch Front.

According to Dan Stober, UDOT specifies a state route counterpart for all Interstate Business Routes posted in the state. This may incorporate one or more routes. The state maintained highways see business route markers posted from the freeway toward the city center or business district and Interstate trailblazers leading back to the parent freeway. Wyoming and several other states also adheres to this signing practice.

Another subsection of Interstate highways are Alternate, Detour, or Emergency routes. These are marked with trailblazers or on small sign panels with the standard Interstate shield posted below a banner stating its classification (which varies from state to state). They are commonly posted on other state-maintained facilities, rural highways or collector routes paralleling Interstate highways in Indiana, Michigan, Wisconsin and a handful of other states. The alternate routes may intersect one another. 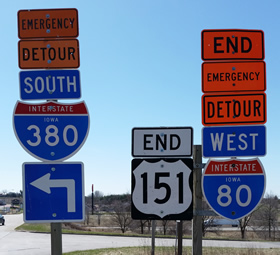 These routes are used for incident management to redirect traffic during emergency or temporary road closures along the parent freeway. Various characteristics factor into what route is designated as an Emergency Interstate Route, such as roadway geometry vs. the primary route, locations of schools, community facilities and at-grade railroad crossings. Routes are usually marked with permanent signing, placed in advance or on the near side of an intersection, and after a turn made by the route. The MDOT guidelines specify placement at a density of approximately five miles between confirming assemblies.

Much more about Emergency Interstate routes is detailed in the Best Practices for Emergency Rerouting – State of Michigan. 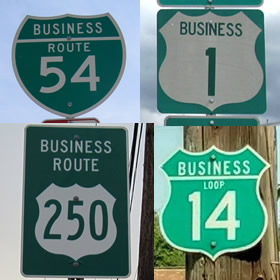 Other business routes using a green on white scheme are posted at various locations across the country. U.S. 1 Business in both Waycross, Georgia and Bel Air, Maryland uses the standard US route marker but with green on white, while the same is found for U.S. 50 Business across Salisbury, Maryland. Another use of this style appears along U.S. 250 Business through New Philadelphia, Ohio. Green on white cutout U.S. route markers take the setup further for U.S. 14 Business in Huron, South Dakota.

Mark Bozanich provided some background on the use of Interstate Business Routes in the Evergreen State: “For the most part, business routes in Washington State are not part of the state highway system. It is harder for the state to get counties and cities to cooperate in posting signs along business routes than to post signs that are on state highways.” So while the business routes are generally locally maintained, the city and county governments are less likely to maintain consistent signage or replace signs as needed. Additionally signs posted on roads and streets intersecting Business Loops and Spurs for the route intersected tend to be omitted.