Interstate 65 connects the Deep South with the Midwest, providing a north-south connection from the ports of the Gulf of Mexico to the ports of the Great Lakes. Alabama’s main street, I-65 begins in the “Port City” of Mobile and runs northeast through wide swaths of pine forest to the capital of Montgomery. Beyond there, I-65 continues northward to the economic hub of the state in Birmingham before reaching the Huntsville area between Madison and Decatur. North of Huntsville and Interstate 565, I-65 passes through 120 miles of the Volunteer State with a direct line through Nashville.

Within the Tennessee capital city, I-65 changed alignments in 2000 to overtake the former Interstate 265 along the west side of the central business district. Beyond there, I-65 combines with Interstate 24 along a short overlap in north Nashville before angling northeast toward the Bluegrass State.

Traveling through Kentucky, Interstate 65 ventures across hilly terrain to Bowling Green and Elizabethtown. The freeway passes to the east of Fort Knox en route to Shepherdsville and the south suburbs of Louisville. I-65 bisects Kentucky’s largest city before crossing the Ohio River into the Falls City area of southern Indiana.

Leaving the Ohio Valley, Interstate 65 flattens out across agricultural areas by the smaller cities of Seymour, Columbus and Franklin while en route to Indianapolis. I-65, like I-70, travels through the heart of Indianapolis as Interstate 465 encircles the Circle City along a 57.5-mile beltway. Traveling northwest, I-65 again transitions into a rural freeway to Lebanon, Lafayette and Crown Point. The northernmost reaches of the freeway serve the industrial city of Gary in the eastern Chicago metropolitan area.

Within Louisville, Kentucky, the Ohio River Bridge Project focused on I-65 in addition to the East End Bridge for Interstate 265. The project included the addition of the Downtown Crossing, a second bridge for I-65 across the Ohio. Accommodating northbound traffic, the new cable-stayed bridge doubled capacity, with the original John F. Kennedy Memorial Bridge redesigned for southbound only use. Additional work focused on improvements to the Kennedy Interchange, where I-64, I-65 and I-71 come together outside Downtown. Improvements cited from the project web page include:4

In December 2006, costs were estimated for the improvements slated for I-64, I-65, and I-265 in Louisville. Reaching over 60% of initial estimates, the cost for two new Ohio River Bridges, and the reconstruction of the Downtown “Spaghetti Junction” interchange between I-64, I-65, and I-71, was estimated to be $3.9 billion. The components of this major construction initiative were as follows:5

Design of the new bridges and confirmation of this schedule of construction was to be completed by early 2007. Funding was a major concern, and lack of funding pushed back the construction phase. However efficiencies in design and construction and inflation savings efforts accelerated the time table, and ground breaking for the Downtown Crossing took place on June 18, 2013 at Waterfront Park in Louisville.6

As announced on November 30, 2015, the new six-lane northbound span was officially named the Abraham Lincoln Bridge8. A public bridge walk was held on the cable stayed bridge five days later where an estimated 50,000 attended. Opening of the bridge to traffic followed late on December 6, 2015. It carried four northbound lanes temporarily as crews shifted southbound motorists onto the span later that month. The new 2,100-foot bridge carried dual traffic to fall 2016 as construction rehabilitated the adjacent cantilever span (JFK Bridge) for the southbound only conversion.9

Five of the six southbound lanes across the Ohio River opened to traffic along he rehabilitated John F. Kennedy Memorial Bridge bridge on October 10, 2016.10 All lanes and ramps on both spans and approaches were open by mid-November 2016, with the ramp from I-65 south to I-64 opened on November 14.11 All electronic tolling (AET) was implemented on the crossing on December 30, 2016. The north tower of the Abraham Lincoln Bridge during the public bridge walk held on December 5, 2015. Photo taken by Tom Reaugh.

Interstate 65 parallels U.S. 31 for much of its route, with the exception of the stretch northwest of Indianapolis, where it parallels U.S. 52 (Indianapolis to Lafayette) and U.S. 231 (old U.S. 152 from Lafayette to Crown Point) and Mobile County, Alabama where it aligns west of U.S. 43 from Satsuma to Mobile.

Warrior. Rounding out work was the 14-mile portion between Lewisburg and Warrior.

Widening of Interstate 65 from four to six lanes between Exits 10 to 13 in Alabama was completed in 2003. A $110-million project completed between 2006 and December 21, 2010 modernized and widened I-65 between Exits 168 and 173 through Montgomery. South of Birmingham in suburban Shelby County, Interstate 65 again widens to six lanes with an expansion project between Exits 242 and 250 completed in December 2011. Work further north expanded the freeway to eight lanes within the vicinity of Interstate 22, with construction of a multi-level systems interchange there underway to October 2015. Construction started in August 2010 expanded Interstate 65 between North Birmingham and Fultondale, Alabama. The project added c/d roadways to both directions of the freeway to connect with I-22 at the directional T interchange pictured here. I-22 was completed on June 20, 2016. 10/08/16.

The first section of Interstate 65 to open in Tennessee was located at the Tennessee-Alabama line, and it opened to traffic on November 15, 1958. The 1.8-mile stretch cost $1.3 million to construct over an 18-month period (starting in May 1957).

Within the Volunteer State, Interstate 65 underwent reconstruction and expansion north of the central business district of Nashville between early 2001 and late 2004. Constructed in 1968, I-65 was expanded to six lanes from Exits 87 to 90 (Briley Parkway) and eight lanes from Briley Parkway (SR 155) to Vietnam Veterans Boulevard (Exit 95). Work included the installation of sound barriers and the introduction of Intelligent Transportation Systems (ITS) technologies.3

Interstate 65 between Elizabethtown and Louisville opened on August 1, 1956 as the tolled Kentucky Turnpike. Tolls were levied along the 39-mile road until June 30, 1975, when bonds that financed its construction were paid off.

Within the Hoosier State, Interstate 65 was fully completed when the stretch in downtown Indianapolis opened to traffic in 1976.6 Interstate 65 at the 47th Avenue North overpass at Lewisburg in Birmingham, Alabama. 10/08/16 Prior to 2000, I-24/65 continued together to Interstate 40, where I-24 turned east and I-65 turned west. The relocation of I-65 over I-265 to the west was undertaken in an effort to partition some of the through traffic around Downtown Nashville. The 11.7 mile stretch of Interstate 65 between Hoover south to Alabaster, Alabama was completed on May 20, 1981. That opening was followed by the 14-mile portion from Lewisburg to Warrior, Alabama on December 19, 1985. 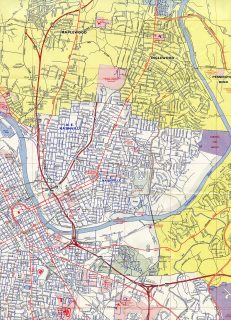 Interstate 65 temporarily ending at Harding Place (Exit 78) in Oak Hill, to the south of central Nashville, in 1969. 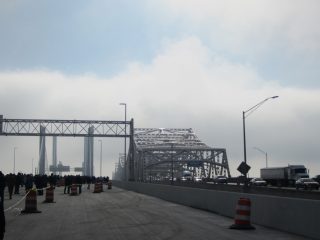 The Kennedy Bridge opened to traffic for Interstate 65 on December 6, 1963. The bridge accommodated four northbound lanes and three southbound lanes until 2016, when it shut down for reconstruction and conversion to southbound only traffic. 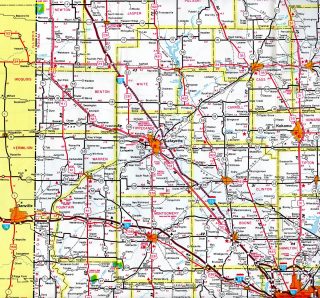 North of incomplete portions of Interstate 65 through the Circle City, I-65 was also nearing completion in 1974 from Lebanon north to U.S. 24 near Remington. U.S. 52 remains along its four-lane alignment parallel to this stretch today.

Traveling a viaduct above a Norfolk Southern Railroad line and parallel Central Avenue, motorists on I-65 are advised of the final two exits: Exit 261 to 15th Avenue in Gary and Exit 262 for I-90 (Indiana Toll Road). 11/05/09

The first of two end signs posted for Interstate 65. The freeway concludes one half mile north of a parclo interchange (Exit 261) with 15th Avenue. 11/05/09

Exit 262 constitutes a wye interchange linking Interstate 65 with the toll plaza and access road from adjacent Dunes Highway to the Indiana Toll Road. Constructed between 2003 and 2004, this interchange replaced an at-grade intersection. 11/05/09

Beyond the ramp to I-90, Interstate 65 concludes at a traffic light with U.S. 12/20 (Dunes Highway) and Taylor Road. Downtown Gary lies to the west and Aetna in east Gary to the east. Taylor Road ties in from an industrial site to the north. 11/05/09

Leaving Downtown Gary, U.S. 12/20 combine from along Dunes Highway eastward the one-way couplet along 4th/5th Avenues. Industrial frontage lines the highway east to the signalized intersection with Taylor Road north and I-65 south. 09/03/05 An overhead directs motorists along Dunes Highway westbound to Interstate 65 south. I-65 meets 15th Avenue nearby. 11/05/09 Turning southward on the half mile approach to I-65 south along I-90 (Indiana Toll Road) east. U.S. 12/20 combine along Dunes Highway from Downtown Gary east to Aetna, meeting I-65 to the immediate north of Exit 17. East of Exit 17, U.S. 12 parts ways with U.S. 20, taking a northerly route through East Chicago, Gary, Portage, Burns Harbor as U.S. 20 parallels a short distance to the south. 11/04/11 Traffic taking Exit 17 from the Indiana Toll Road separates with a wye interchange connecting to I-65 south at 15th Avenue and a second trumpet interchange with U.S. 12/20 (Dunes Highway). Photo by Don Hargraves (09/23/02). Following the ramp from the Indiana Toll Road to Interstate 65, motorists split for the freeway mainline south to Lafayette and 15th Avenue into Gary. Photo by Dave Sudhoff (05/21/05). The first shield for Interstate 65 stands to the immediate south of U.S. 12/20 (Dunes Highway). An adjacent right turn lane connects with a business as the freeway begins. 11/05/09 Interstate 65 north at the former intersection with the access road (Exit 262) to the Indiana Toll Road. Removed during 2003-04 construction, this traffic signal was replaced with an interchange. Photo by Brian Dowd (12/02/02). The older ground level sign posted one half mile west of Exit 17 along Interstate 90 east. Photo by Chris Patriarca (05/26/03). U.S. 12/20 (Dunes Highway) westbound leaves the Aetna community of east Gary and approaches the trumpet interchange for I-90 (Indiana Toll Road). The sign bridge displaying advance overheads for I-65 south and the toll road was removed. Photo by Brian Dowd (12/02/02). Southbound view of Interstate 65 at the former stoplight between the freeway end and Indiana Toll Road (I-90). This signal was removed in 2003-04 and replaced with an interchange. Within Lake County, Interstate 65 is designated the Casimir Pulaski Memorial Highway. Photo by Brian Dowd (06/15/02). This guide sign directed traffic at the signalized intersection linking Interstate 90 with I-65 south. Photo by Brian Dowd (06/15/02). I-65 southbound gains a fourth lane from the U.S. 90 eastbound entrance ramp to Interstate 10. A diagrammatic overhead outlines the configuration for I-10 where three lanes default onto westbound to Biloxi, Mississippi and two onto eastbound for Pensacola, Florida. 11/25/14 The final southbound reassurance shield of Interstate 65 stands between U.S. 90 and the Halls Mill Road overpass. 11/25/14

Florida and Mississippi are used for the control points of Interstate 10 at the south end of I-65. I-10 control cities otherwise are Pensacola for eastbound and Pascagoula for westbound. 11/25/14

Ramps for Interstate 65 to I-10 are assigned Exit number zero, but only at their separation. I-10 continues east six miles to Downtown Mobile and the George Wallace Tunnel and west 20 miles to the Mississippi state line. 11/25/14

The collector distributor from the cloverleaf interchange (Exit 17) with SR 193 (Exit 17) returns to eastbound I-10 two miles ahead of Interstate 65 north in Mobile. Photo by Peter Johnson (02/23/20).

The first of two diagrammatic overheads for Interstate 65 (Exit 20) appears over I-10 eastbound at Riviere Du Chien Road. The forthcoming three-wye interchange uses left side ramps to and from Interstate 10 east. Photo by Peter Johnson (02/23/20).

A two-lane ramp (Exit 20) takes motorists onto Interstate 65 north toward Montgomery, Birmingham and Atlanta via I-85 north. Photo by Peter Johnson (02/23/20).

Exit 20 departs Interstate 10 east for I-65 north. Ramps from both directions of I-10 combine with four lanes leading north to U.S. 90 (Government Boulevard). Doubling as a commuter route, I-65 remains with six lanes to Saraland. Photo by Peter Johnson (02/23/20). The entrance ramps from Alabama Route 163 form an auxiliary lane west to Interstate 65 north. I-10 maintains three through lanes toward Tillmans Corner. 05/06/16 Two lanes prepare to depart I-10 west for Interstate 65 north. Beyond U.S. 43 (Exit 19), the freeway turns northeastward across the Mobile and Tensaw Rivers on a rural drive 171 miles north to Montgomery. 05/06/16 The bulk of traffic utilizing Exit 20 from I-10 west is local. The northbound freeway travels through the Midtown Mobile area accompanied by commercialized frontage roads. 05/06/16

The first confirming marker for Interstate 65 appears just beyond the merge of ramps from I-10. 11/21/14