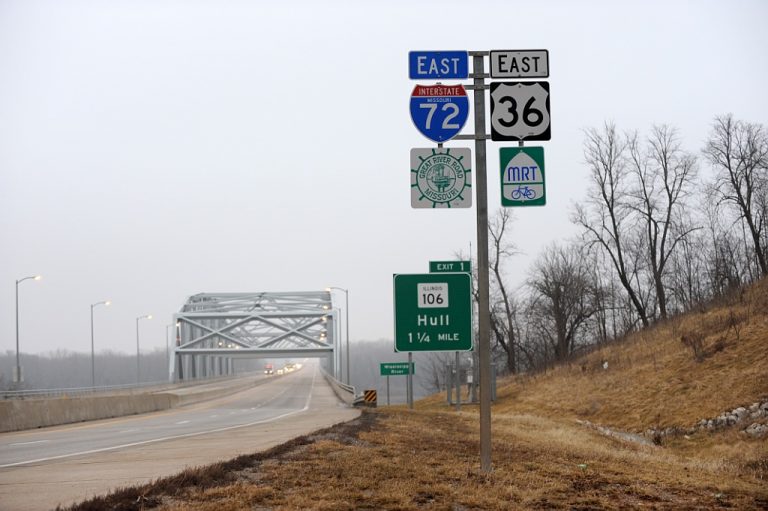 Interstate 72 stretches across central Illinois from Hannibal, Missouri to Champaign-Urbana along a mostly rural route. Prior to 1995, the freeway comprised just an 80-mile route east from Springfield to Decatur and Champaign. The Central Illinois Expressway (U.S. 36) extended the route west to Quincy. This included designating a business loop through Jacksonville.

Illinois Route 110 and Missouri Route 110, collectively the Chicago-Kansas City (CKC) Expressway, overlap with Interstate 72 east from U.S. 36 and Hannibal to I-172 north. Designated in 2010, the expressway follows a series of preexisting routes from I-35/435 outside Kansas City to the Jane Byrne (Circle) Interchange joining I-290 with I-90/94 in Chicago, Illinois.

I-72 ends at U.S. 61 (Avenue of the Saints) in Hannibal, but further lengthening was proposed by Marion County. The five-item transportation list finalized by the County Commission on February 16, 2016 added the upgrade of U.S. 36, from the Mark Twain Memorial Bridge across the Mississippi River, to the split of U.S. 24/36 near Rocket Plaza, as a priority. Citing potential benefits including economic development and marketing of Hannibal Lakeside Industrial Park, the Commission advocated extending Interstate 72 west approximately seven miles.1 The proposed extension was also a topic of discussion at the Missouri Highways and Transportation Commission monthly meeting held in Hannibal on September 1, 2016.2

The Federal Highway Administration (FHWA) denied the Missouri Department of Transportation request to lengthen I-72 west to U.S. 24 in February 2017. FHWA cited rules that Interstates must end at other Interstates, despite I-72 currently ending at U.S. 61. When the Mark Twain Bridge opened in September 2000, U.S. 61 was the best end point option available for Interstate 72. Since the bridge met Interstate standards, FHWA approved the 1.75 mile extension into Missouri.6

U.S. 36 is a controlled access expressway west to Cameron. This corridor is also a part of Missouri 110 (CKC). If the Hannibal Expressway gets built around the west side Hannibal, estimated to cost $38 million per a 2007 study, then FHWA may approve extending Interstate 72.6 The bypass will link with the interchange joining U.S. 36 and U.S. 24 near Rocket Plaza.

The proposed extension of Interstate 72 through Missouri from Hannibal to St. Joseph is part of High Priority Corridor 61: Missouri Corridors.

Interstate 72 overlaps with U.S. 36 from Hannibal, Missouri east to Decatur, Illinois. U.S. 51 joins the route to bypass Decatur, with I-72 traveling independent of a US highway eastward from Exit 141 to Champaign.

Interstate 72 was completed between Springfield and Champaign in November 1976. Planned since the early 1960s, the Central Illinois Expressway portion of I-72, from Interstate 55 west to Hull, opened to traffic on November 22, 1991.3 Signing of the route as I-72 commenced within a week of April 27, 1995.4

Illinois first proposed the designation of Interstate 172 for the Central Illinois Expressway between IL 336 near East Hannibal and I-55 at Springfield. The American Association of State Highway and Transportation Officials (AASHTO) Route Numbering Committee approved the establishment of I-172 on June 9, 1991, with it subject to both Federal Highway Administration (FHWA) approval and completion of the route. The FHWA however preferred to designate this route as an extension of I-72. Due to this change, Interstate 172 was moved to the IL 336 freeway spurring north from the proposed I-72 to Quincy and U.S. 24. AASHTO approved both routes on April 22, 1995.

Part of the extension of Interstate 72 included the construction of the Mark Twain Memorial Bridge across the Mississippi River. The steel truss bridge was dedicated on September 16, 2000. The following bridge facts were based on information distributed by the “Hannibal Bridge Dedication Steering Committee”:

Exit numbers in Missouri reflect the distance to the interchange joining U.S. 36 with Interstate 35 at Cameron, where Route 110 (CKC) turns south. There are no plans to extend Interstate 72 west from Hannibal all the way to I-35 or to Interstate 29 at St. Joseph. An $80-million project upgraded 52 miles of U.S. 36 west from Hannibal. The four lane expansion started in September 2005 with preliminary design work. Spanning four counties, the project was finished in the following order:5 The first portion of Interstate 72 ran west from Champaign to Monticello. The remainder of the route would not open until 1976. When it did IL 47 was decommissioned from Exit 176 west to Decatur Shields posted ahead of the Route 79 westbound on-ramp to Interstate 72. Decommissioned by 2015, U.S. 61 Business turned west onto I-72 from Mark Twain Avenue for the return to the Avenue of the Saints. Photo by Jeff Royston (02/05/08). Button copy signs for the cloverleaf interchange joining I-57 and I-74. This exchange lies just two miles north Interstate 72. Photo by Michael Summa (1979).