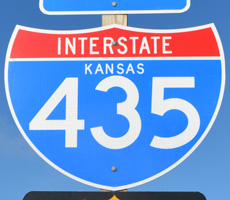 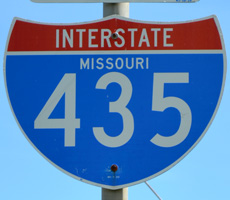 Interstate 435 is the 83-mile, two-state beltway encircling the Kansas City metropolitan area. The freeway serves Independence, Lee’s Summit and Overland Park among other suburban cities. While providing a bypass for long distance travelers north to St. Joseph and Des Moines, and south to Wichita and Joplin, most of the freeway serves commuter traffic. Areas of the north beltway are somewhat rural while I-435 to the southwest, south and east of Kansas City are suburbanized. The northwestern quadrant overlaps with Interstate 29 for 3.1 miles by Kansas City International Airport (MCI).

AASHTO designated the Kansas City beltway as I-435 on June 23, 1969. The route appears on the Missouri Official Highway Map by 1964, but only as an east side bypass between I-35 near Lenexa, Kansas and I-35 at Claycomo, Missouri. Opened to traffic by 1967, the initial section of freeway ran east from I-35 to U.S. 69 in Overland Park, Kansas. The freeway north and east to Missouri Route 78 (East 23rd Street) at Blue Summit was completed by 1970.

The original I-435 alignment east of I-35 was finished by 1975, with a full cloverleaf interchange at the west end with a local road tieing it into Pflumm Road to the south, and a semi directional-T interchange at Claycomo to the north.1 U.S. 50 was relocated to follow I-435 west from Lee’s Summit, Missouri to Overland Park, Kansas as conditionally approved by AASHTO on June 29, 1978.

An east-west section of I-435 parallel to Missouri Route 291 between Exits 36 and 41A/B was opened by 1983. Interstate 435 in Kansas and Missouri was fully open to traffic in December 1986 with the completion of the Missouri River Bridge.1

Work on the freeway mainlines was formally completed during a ceremony held on December 14, 2007. Officials buried a steel triangle that day to symbolize a new era of transportation as the old Grandview Triangle Interchange days were over. The junction was renamed by the Missouri General Assembly in 2005 as the “Three Trails Crossing Memorial Highway”. The Three Trails name is derived from the trails, Santa Fe, Oregon and California, that historically ran through the area.2

The $600-million Johnson County Gateway project focused on upgrading Interstate 435 between West 87th Street and U.S. 69 in the Overland Park area. Phase 2 of construction rebuilt the beltway from K-10 eastward.

Work commenced on the $288-million Phase 2 of the Johnson County Gateway project in May 2014. Construction altered the three-wye interchange with the K-10 freeway to incorporate it with new collector distributor roadways leading east to Lackman Road and the cloverstack interchange with Interstate 35. Subsequent work replaced the loop ramp from I-35 north to I-435 west with a new flyover while extending the c/d roadway system north from K-10 to 95th Street. Road construction for Phase 2 wrapped up in January 2017, with finishing work including landscaping, signing and painting was completed by late April 2017.3 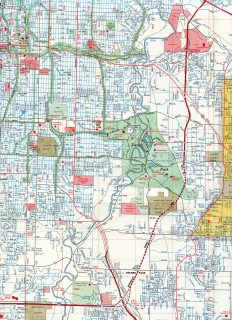 Interstate 435 from the Grandview Triangle Interchange northward to Gregory Boulevard near Swope Park was completed by mid 1970. Further extension of I-435 north to NE 48th Street (Exit 54) followed by late 1971. 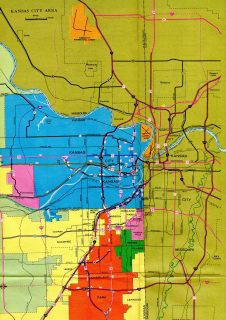 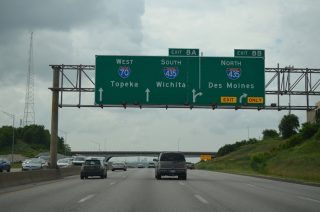 Construction between 2010-12 both expanded I-70 at the cloverstack interchange with I-435 and added ramps from the beltway to adjacent U.S. 40.

Forthcoming Exit 52B utilizes the original directional T interchange with I-35 at the former north end of I-435. Beyond I-35 and Pleasant Valley, Interstate 435 reenters Kansas City ahead of the Route 152 freeway. 06/19/15

Exit 52A departs for U.S. 69 through Claycomo. U.S. 69 merges with I-35 north through Pleasant Valley after the Ford Kansas City Assembly Plant nearby. The beltway combines with I-29 in 19 miles by Kansas City International Airport (MCI). 06/19/15

Interstate 35 leads southwest to North Kansas City while I-35 northbound serves commuters to Liberty and the separation with U.S. 69 to Excelsior Springs. Route 110 (Chicago Kansas City Expressway) accompanies the freeway north to the U.S. 36 expressway at Cameron. 06/19/15 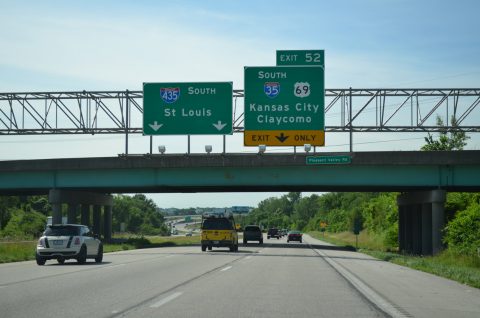 Interstate 435 trends southeast from the Route 152 freeway to nip the western corner of the Pleasant Valley city limits as Exit 52 departs for I-35 south and adjacent U.S. 69. 06/19/15 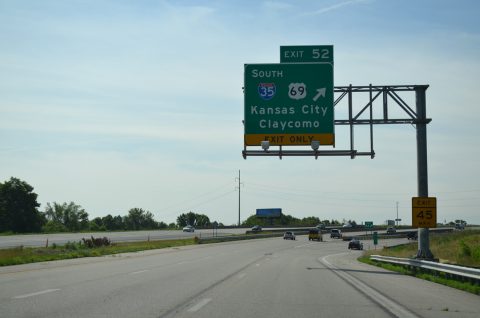 Exit 52 leaves I-435 south ahead of bridges over Shoal Creek. There is no access to I-35 north to Liberty, with the Route 152 expressway providing a direct route to the Clay County suburbs from Exit 49B. 06/19/15

Interstate 35 curves northeast into the village of Claycomo ahead of the Kansas City beltway. Upcoming Exit 12A serves both I-435 south to Randolph and Independence and local access to U.S. 69 for the Ford Kansas City Assembly Plant. 06/18/15

A directional interchange (Exits 12A/B) joins I-35 and the south end of Route 110 (Chicago Kansas City Expressway) with Interstate 435. The CKC overlaps with freeways and U.S. highways from Kansas City to Interstate 290 (Eisenhower Expressway) in Chicago, Illinois. 06/18/15 Original button copy sign for I-435 (Exit 12A) on I-35 south. Due to the angle which the two freeways converge, there is no direct access to I-435 north. Motorists headed to the beltway north were directed to use Route 152 west previously from Liberty. Photo by Eric Stuve (11/30/02). 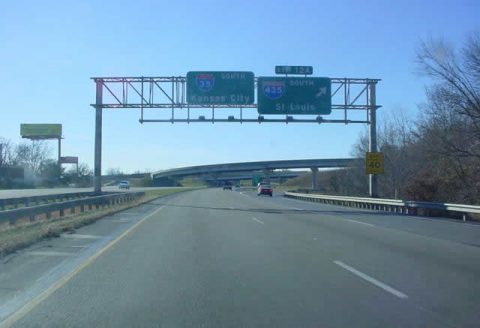 Exit 12A separated from the I-35 mainline for Interstate 435 south. The beltway proceeds 10.5 miles south to meet I-70 by Arrowhead and Kauffman Stadiums. Interstate 35 continues 9.6 miles southwest to combine with I-70 west along the Alphabet Loop encircling Downtown Kansas City. Photo by Eric Stuve (11/30/02). 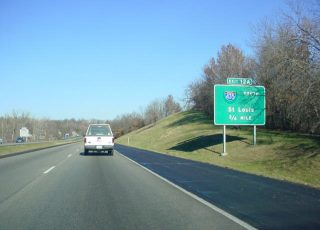 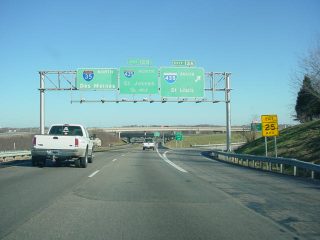 Control cities on the Missouri side of the Kansas City beltway use destinations of I-29, I-35 and I-70. The eastern half of the beltway uses St. Louis for the connection with I-70 east through Blue Springs. Photo by Eric Stuve (11/30/02). 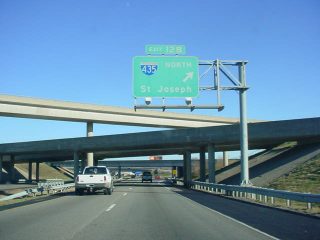 A directional ramp (Exit 12B) leads drivers onto Interstate 435 north from Pleasant Valley to northern reaches of the Kansas City limits, Smithville and MCI Airport. Photo by Eric Stuve (11/30/02).

Separating all traffic bound for I-35 from the beltway mainline, the Johnson County Gateway Project added a collector distributor roadway starting within the exchange at K-10. Shields for U.S. 50, 56 and 169 reference the various freeway overlaps the routes make through Lenexa and Overland Park. 11/03/16

Interstate 435 maintains three eastbound lanes through the three-wye interchange with K-10, and four east across I-35. The c/d roadway extends 1.4 miles to separate ramps for I-35. The beltway switches to east/west cardinal directions at this point. 11/03/16

Two lanes of traffic join the c/d roadway for Interstate 35 from K-10 east adjacent to the lowering exit ramp for Lackman Road. 11/03/16

I-35 overlaps with U.S. 169 southward to Olathe and with U.S. 56 west to the suburb of Gardner. Both routes accompany the freeway north to Shawnee Mission Parkway. 11/03/16 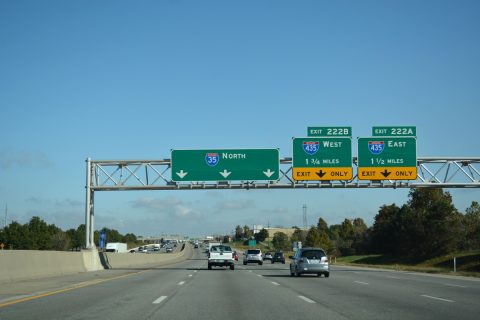 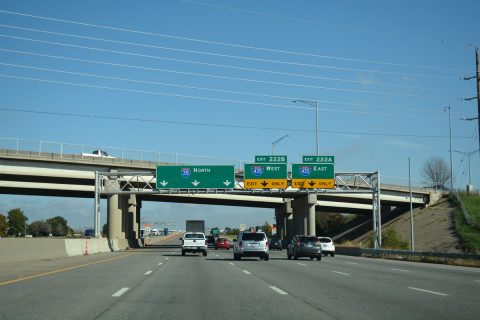 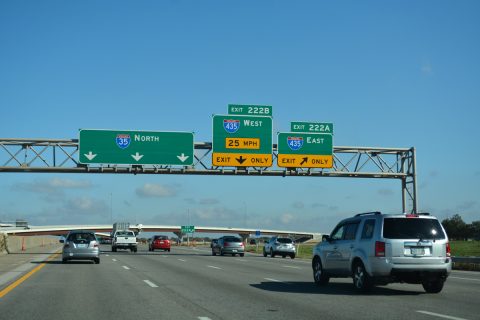 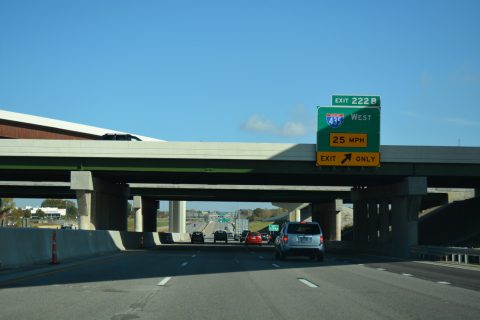 A loop ramp (Exit 222B) follows for Interstate 435 west and K-10. K-10 constitutes a full freeway west from Lenexa to Lawrence. I-435 turns north through Shawnee to cross the Kansas River at Edwardsville. 11/03/16 Angling southwest from the diverging diamond interchange (DDI) with 95th Street, Interstate 35 advances one mile to Exits 222B/A for the Kansas City beltway. 10/31/16

Construction during the Johnson County Gateway Project relocated the off-ramp (Exit 222B) for I-435 west to improve its curvature and tie it into a new c/d roadway leading west to Lackman Road (Exit 1A) and the K-10 freeway to Lawrence (Exit 1B). 10/31/16 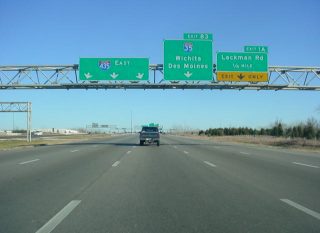 Interstate 435 formerly expanded to five lanes from the merge with K-10 east to Exit 1A with Lackman Road. The Lackman Road off-ramp was relocated to a new c/d roadway during the 2014-16 Johnson County Gateway project. Photo by Eric Stuve (11/30/02). 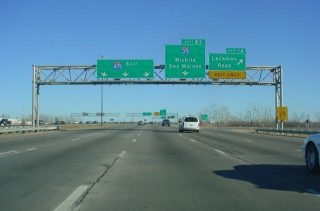 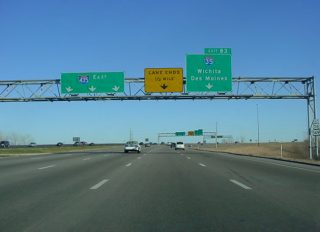 Back to back lane drops previously took place along I-435 east leading to Exit 83. The forthcoming interchange with Interstate 35 is the same design now, but the ramp geometry was improved during the Johnson County Gateway Project with new flyovers added for east to north and west to south. Photo by Eric Stuve (11/30/02). 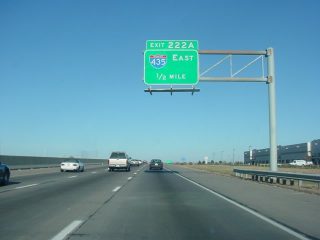 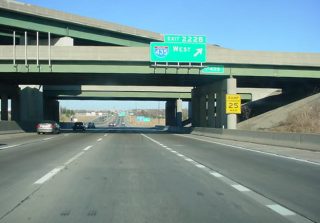 Motorists looping onto I-435 west from I-35 north previously encountered a weaving traffic pattern with subsequent ramps at Lackman Road and the split with K-10 west. Photo by Eric Stuve (11/30/02).