Originating at the Fort Pitt Bridge east end by the Point in Pittsburgh, Interstate 279 is an urban loop joining Downtown with Franklin Park in the northern suburbs. I-279 spans the Allegheny River across the Fort Duquesne Bridge to join Parkway North by Acrisure Stadium (home of the Pittsburgh Steelers NFL franchise) and PNC Park (home of the Pittsburgh Pirates MLB franchise) along the North Shore. Parkway North turns northward at East Allegheny and continues past Bellevue and Westview to connect with Interstate 79.

Prior to June 2009, Interstate 279 extended west from Downtown Pittsburgh onto Parkway West via the Fort Pitt Bridge to I-79 near Carnegie. This route traveled through the vicinity of Crafton and Green Tree, and under Mount Washington via the Fort Pitt Tunnel. It was replaced by a northwestern extension of Interstate 376, following an interim period of cosignage along Parkway West. 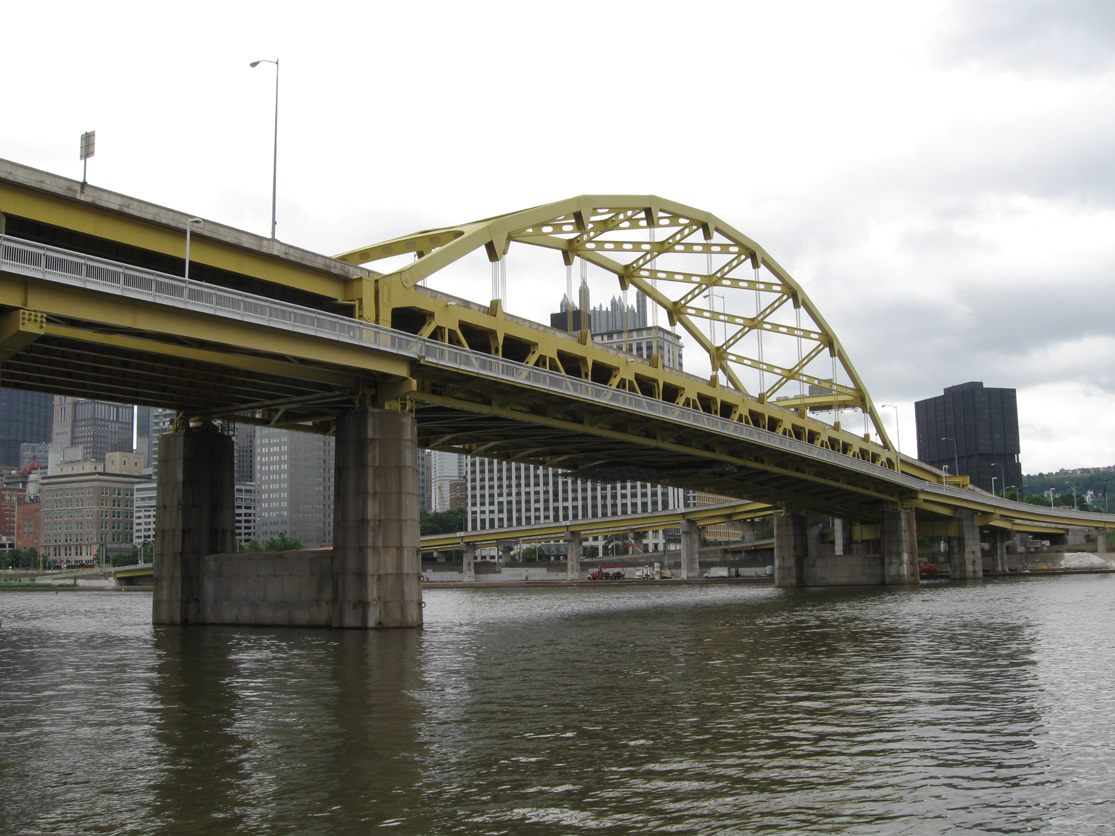 Painted Aztec Gold like the nearby Fort Pitt Bridge, the Fort Duquesne Bridge (I-279) spans the Allegheny River in this scene looking south from the Three Rivers Heritage Trail along the north banks of the river. 06/13/10

The Parkway West segment, which is now designated as Interstate 376 and U.S. 22-30, is much older than the Parkway North section of I-279. Parkway North was constructed in the mid to late 1980s while Parkway West was constructed in the 1950s. The Fort Pitt Bridge opened in 1959 and the Fort Pitt Tunnel opened in 1960. Both were incorporated into the Interstate system in the 1960s.1 A road trip through the area in June 1989 revealed stub ramps at the then future northern terminus.

Starting in 1993, various portions of Interstate 279, including the Fort Pitt Bridge and Tunnel, closed for major road work as part of a long term rehabilitation project along Parkway West.2 The $200 million project culminated with the October 1, 2003 opening of the two lane, 2,500 foot long ramp taking inbound Parkway West traffic to the outbound Parkway East over Monongahela Wharf. The final two year $84.2 million project finished two weeks ahead of schedule. Additionally the Stanwix Street off-ramp on Interstate 376 east opened to traffic in conjunction with the Fort Pitt Bridge ramp.3 The multiyear project included improvements to the Fort Pitt Tunnel, Fort Pitt Bridge, and other associated ramps along the freeway. Prior to 1970, Interstate 279 was proposed as the bypass for through traffic along Interstate 79 between Washington and Erie, Pennsylvania. I-79 was relocated to the west as the suburban route was completed much sooner than the Parkway North section.

A $67.5 million project through Spring 2009 expanded Parkway West to six and eight lanes along a 1.5 mile long stretch in the vicinity of Carnegie. Construction also lowered a hill by as much as eight feet to improve safety and added two ramps omitted from the mid 1970s construction of the interchange linking I-79 and 279. The original $17 million exchange was one of the most expensive in the state at the time and two ramps were dropped from the final design to cut costs. Their removal was also based upon traffic being directed onto PA 60 (Steubenville Pike) from I-79 south to Pittsburgh International Airport. Steubenville Pike was vastly more rural then with upgrades planned to handle airport bound traffic.4,5

Opened in November 2008, the new ramp connecting Interstate 79 south to the Parkway West westbound includes a 640 foot long flyover over Campbells Run Road. The new ramp linking Parkway West eastbound with Interstate 79 north includes a 1,500 foot long flyover over both freeways. Opening of these ramps was forecast to bring a 35% reduction in traffic on nearby PA 60 (Steubenville Pike).4

Several changes were made to the Pittsburgh’s Interstates during the first 15 years of the system. For Interstate 279, the route was initially proposed as a western bypass of Pittsburgh, with the I-79 mainline looping east to Downtown via the Fort Duquesne Bridge and Penn Lincoln Parkway West to Carnegie. A succeeding change took place on June 30, 1970, with the American Association of State Highway Officials (AASHO) approval of the following:

Interstate 279 was extended westward over Parkway West the following year as approved by AASHTO on December 3. I-279 overtook I-76 west from the Fort Pitt Bridge to I-79, as I-76 was reassigned to the remainder of the PA Turnpike northwest to Ohio and Parkway East was renumbered as new Interstate 376. This configuration remained in place until 2009, when I-376 was designated over Parkway West as part of a 70 mile long extension to I-80 near the borough of Wheatland. An end I-279 shield assembly stands along side the northbound transition ramp to Interstate 79 north. This sign was replaced by 2010. Photo by Patrick Lilja (2006). 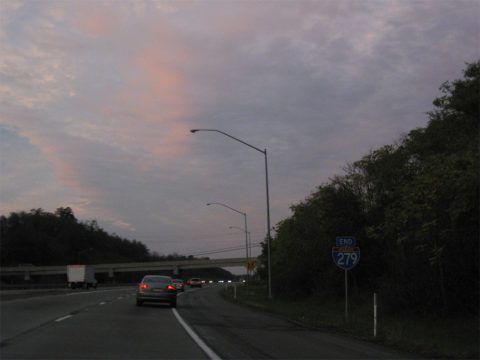 I-79 advances north six miles from the wye interchange with I-279 to the Cranberry Connector with the Pennsylvania Turnpike (I-76). 09/30/10 The three lanes of I-79 south separate with two lanes for both I-279 south through the North Hills to Pittsburgh and the mainline south to Pittsburgh International Airport (PIT) and Carnegie. 06/11/10 Left Exit 72 to Interstate 279 south parts ways with I-79 south as the freeway turns west to the borough of Sewickley Hills. I-279 serves commuters southward into the Steel City, with the reversible HOV roadway accompanying the route from U.S. 19 as it leaves the borough of West View. 06/13/10 Interstate 376 enters the Fort Pitt Tunnel through Mount Washington to the immediate east of Exit 69B (U.S. 19/PA 51 north). Beyond the two lane tunnel, a left side entrance ramp from PA 837 (Carson Street) expands the eastbound freeway to four lanes across the Fort Pitt Bridge. A weaving traffic pattern ensues with the mainline separating into ramps for I-279 north and Downtown. 06/11/10 Interstate 376 transitions to Penn Lincoln Parkway East via a two-lane ramp as I-279 begins via Left Exit 70C. I-279 partitions with a ramp for Fort Duquesne Boulevard before crossing the Fort Duquesne Bridge to the North Shore. 06/11/10 Westbound travelers along I-376/ U.S. 22-30 pass through a tunnel below ramps linking Grant Street and Fort Pitt Boulevard with Parkway East and the Smithfield Street Bridge on the half mile approach to Exit 70C with Interstate 279 north. 06/12/10 Three lanes of Interstate 376 west continue below Wood Street as Left Exit 70D departs for Stanwix Street to the Golden Triangle. The succeeding exit departs for Interstate 279 and the Fort Duquesne Bridge. 06/13/10 A narrow two lane ramp elevates Interstate 376/U.S. 22-30 west onto the Fort Pitt Bridge ahead of Mount Washington and Westwood while Exit 70C lowers to merge onto the left side of I-279 as it passes through Point State Park. 09/30/10 Traffic along I-279 south & U.S. 22-30 (Penn-Lincoln Parkway West) west entered a wye interchange (Exit 1B) for Rosslyn Farms just ahead of the ramps (Exit 1A) for Interstate 79 north to Erie and south to Washington. Sign changes made here by 2009 greened out U.S. 22/30 in favor of I-376 west for the freeway mainline to Moon Township and Pittsburgh International Airport (PIT). 10/31/04 Motorists bound for I-79 departed in unison from the ending Interstate 279 at Exit 1A. Changes made here by 2013 expanded the I-376 mainline to three lanes.
U.S. 22 continues west through Weirton, West Virginia, before entering Ohio, where it serves the cities of Steubenville and Cambridge. Lincoln Highway (U.S. 30) travels west to Chester, West Virginia, then across the Ohio River to East Liverpool, Ohio. 10/31/04 This scene looking one quarter mile ahead of the then unnumbered ramp for I-79 south to Washington changed during 2007-08 construction to both widen Penn Lincoln Parkway West and add the missing ramps between I-79 and I-279. Three eastbound lanes continue through here as part of the I-376 mainline now. 10/31/04 U.S. 22/30 east at the former transition onto the northbound beginning of Interstate 279. Prior to November 2008, there was no northbound access to I-79 from this direction. This missing movement was previously accomplished via PA 60 (Steubenville Pike) east through Robbinsville township. 10/31/04