Interstate 14 is the Central Texas Corridor, following U.S. 190 from Brady east to Killeen, Temple, Bryan-College Station, Livingston and Woodville, and SH 63 between Jasper and the Sabine River. The extension of IH 14 west to San Angelo was included in the Build Back Better Plan infrastructure bill approved by Congress on November 5, 2021. The corridor expansion includes a northern branch of IH 14 from San Angelo to IH 20 at Midland-Odessa and a southern branch paralleling U.S. 67 west to IH 10 near Fort Stockton.13

The $1.2 trillion infrastructure bill also includes the Gulf Coast Strategic Highway, the extension of Interstate 14 east across Louisiana, Mississippi, Alabama and Georgia. Build Back Better Plan. Approval of the bill funds phased improvements along the corridor.13

The Texas Transportation Commission announced on January 27, 2017 that the 25 mile long section of U.S. 190 between U.S. 190 Business (BU-190E) at Copperas Cove / Fort Hood and IH 35 at Belton was officially designated Interstate 14. Initial signs for IH 14 were unveiled on April 22, 2017. Completion of sign installation was slated for August or September of 2017, with guide sign changes taking place afterwards.14

During Fall 2013, city officials from Killeen, Copperas Cove, Harker Heights and Nolanville, Texas discussed and agreed on adding the designation of Interstate 14 along the freeway taking U.S. 190 from Copperas Cove to IH 35 in Bell County. The measure was sent to lawmakers in Austin and Washington. The existing freeway linking the four cities was already built to Interstate standards.7

The “Central Texas Corridor” was designated as High Priority Corridor 83 by Section 11204 of the draft House DRIVE Act bill, H.R. 22. It incorporates all of U.S. 190 east from IH 10 to Woodville, and SH 63 to the Sabine River Bridge at Burrs Crossing.8 Fixing America’s Surface Transportation (FAST), a federal highway authorization bill signed into law on December 4, 2015, included Amendment No. 6 designating the Central Texas Corridor as future Interstate 14.9,10,11

Establishment of IH 14 along the 25 mile long stretch of U.S. 190 from U.S. 190 Business in Copperas Cove eastward to IH 35 was officially submitted for the May 24, 2016 meeting of the American Association of State Highway and Transportation Officials (AASHTO) Special Committee on U.S. Route Numbering (USRN).12 The USRN however rendered a negative decision for Interstate 14, deeming the number unacceptable and opting to work with Texas on another number choice. Proposed by U.S. Rep. Max Burns and other legislators in 2004 along with the 3rd Infantry Division Highway (Interstate 3), the 14th Amendment Highway, or Interstate 14, was envisioned to run west to Austin, Texas, and east to Myrtle Beach, South Carolina, creating a “Gulf Coast Strategic Highway.” Under this scenario, to connect properly with the nearby Interstates, I-14 would continue west from Natchez to Alexandria, Jasper, College Station, and Austin.5 To the east, I-14 would extend east into South Carolina, where it would connect with Interstate 20.

The new freeway corridor would follow U.S. 84 from Louisiana into Mississippi through Natchez, Brookhaven, Laurel, and Waynesboro before entering Alabama. Once in Alabama, the route will follow U.S. 84 east to Grove Hill, then angle northeast via Clarke County Route 35 toward Camden. At Camden, the freeway would turn east again via SR 28 and SR 21, connecting with I-65 east of Hayneville via Lowndes County Route 26. From that point, I-14 would joing I-65 north to I-85 north, possibly using the planned SR 108 / Montgomery Outer Bypass. Near Tuskegee, I-14 would separate from I-85 and follow U.S. 80 east to Phenix City and enter Georgia at Columbus.

The portion of Interstate 14 that overlays U.S. 80 is part of Congressional High Priority Corridor 6. Corridor 6 consists of the following:

Interstate 14 is referred to as the “14th Amendment Highway.” This name honors the 14th Amendment of the U.S. Constitution, which provides for equal rights to all persons in the United States, which is of particular importance in the Deep South, through which I-14 would traverse.

A 2006 news article6 indicated that plans were already afoot to extend Interstate 14 both east and west from the legislatively designated termini. According to the article, Interstate 14 would begin near El Paso, Texas, then extend east through eastern Texas, cross Louisiana, follow the planned route from Natchez to Augusta, then continue east to Wilmington, North Carolina. The freeway would be accompanied by rail, would connect ports, and provide access to various military bases along the way.6

The concept of Interstate 14 (and companion I-3/Savannah River Parkway) was originally proposed by Republican Representative Max Burns from Georgia. A planned “Route Initiation Act” was authored by Rep. Burns in July 2004 for the 108th Congress that would authorize a study of the planned Interstate 14 corridor: “To require a study and report regarding the construction and designation of a new Interstate from Augusta, Georgia to Natchez, Mississippi.” This act is known as the “14th/14 Amendment Interstate Highway Initiation Act.” According to the act, the Interstate highway is necessary for several reasons, including (1) the economic development of the 11-state region known as the “Southern Black Belt” in a similar model to the Appalachian Regional Commission in 1965 and (2) providing for increased opportunity for a historically impoverished part of the country (the act actually identifies that those residents, “particularly the descendants of freed slaves, suffer from high unemployment, low incomes, low education levels, poor health, and high infant mortality.”4

Even though I-10 and I-20 are somewhat nearby, the act further states that “disparity in transportation infrastructure investment has been a key contributing factor to the persistent poverty and social ills of this region. The lack of adequate east-west Interstate highway access has provided a significant impediment to travel throughout the region, served as a severe obstacle to the attraction of industry and jobs, and has been a detriment to public health and transportation safety.” The last paragraph of Section 2 of the Act resolves that Interstate 14 should be constructed through the historic Southern Black Belt.

The bill was introduced in the House of Representatives by six members of Georgia’s delegation in late July; the legislation was written by Representative Burns. Companion legislation for I-14 and I-3 was filed in the Senate by Georgia Democrat Zell Miller and Georgia Republican Saxby Chambliss.1 The bill was assigned the designation H.R. 4925 and was introduced on July 22, 2004. The bill required the Secretary of Transportation to study the two proposed Interstate routes and present options for construction to Congress by December 31, 2004.4

On November 2, 2004, Representative Max Burns was defeated by Democrat John Barrow. Barrow continued efforts to lobby for the potential Interstate corridor. On August 10, 2005, the legislation to study the Interstate 14 corridor was signed into law by President George W. Bush as part of the Safe, Accountable, Flexible, Efficient Transportation Equity Act of 2005: A Legacy for Users (SAFETEA-LU). However, the Interstate 14 designation was not written into law. Here is the text from Section 1927 of SAFETEA-LU:

The 14th Amendment Highway Corridor report delivered to Congress on February 3, 2012 specified a 600 mile route for Interstate 14. The corridor would run from Natchez, Mississippi east to Montgomery, Alabama and Columbus, Macon and Augusta in Georgia. The route between Macon and Augusta would tie into I-20 near Exit 183 or I-520 near Fort Gordon. This 100 mile long stretch would involve new highway construction through Milledgeville, Sandersville and Wrens to connect with I-520 (Bobby Jones Expressway).

A similar report was filed on the 3rd Infantry Division Highway, Interstate 3 between Savannah, Augusta, western North Carolina and Knoxville. The report however did not identify funding for the corridor. The 14th Amendment Highway Study examined five options for the route with cost estimates ranging from $296 million to $7.7 billion. Rep. John Barrow indicated that he would continue efforts toward making the reports a reality.8 U.S. 190 turns west along side IH 14 to Nolanville, Harker Heights and Killeen while IH 35 remains southward to Salado, Jarrell and Georgetown. 05/10/22 The first westbound IH 14 confirming marker stands just beyond the exchange with IH 35. 05/10/22 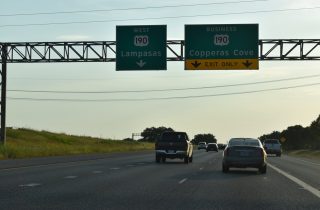 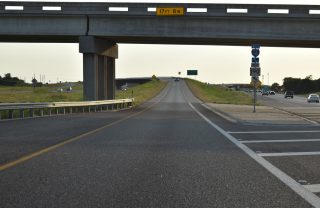 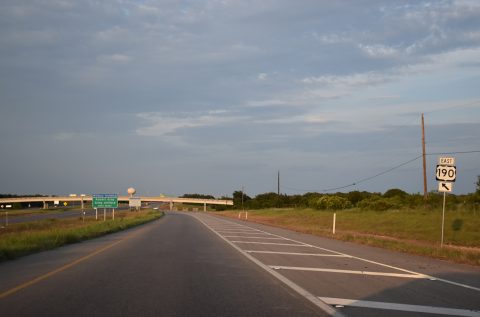