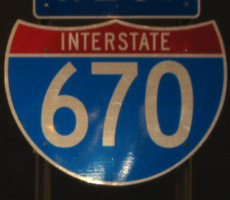 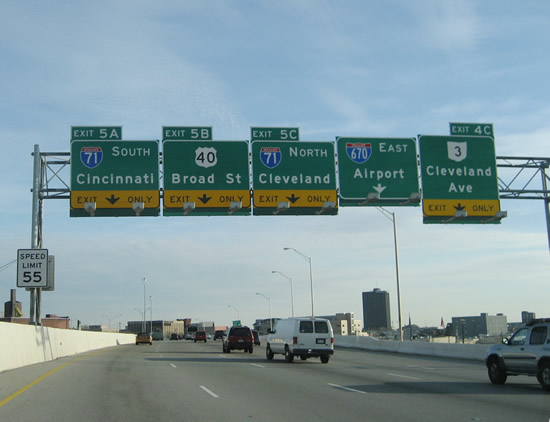 Prior to the Columbus Crossroads upgrade of I-670 at I-71, five single lane ramps departed within a short distance. The project amended this pattern by expanding the mainline to two lanes that now travel along the left side of the freeway. All ramps to I-71 and SR 3 depart from the right, as I-670 shifts to the southern leg of the two prong freeway between U.S. 23 and I-71. The northern prong serves local traffic from U.S. 23 north and the westbound mainline. Photo by Jasper Nijdam (04/02/08).

Interstate 670 in Ohio provides a crosstown connection between I-70 and I-270, roughly parallel to U.S. 62. The highway comprises the northern half of the inner belt, a system of freeways including Ohio Route 315, I-70 and I-71. I-670 provides congestion relief to the southern inner belt alignment and the I-70-/71 overlap. The freeway carries up to eight lanes of travel.

Planned in 1965 with designs for I-670 approved by 1971, construction was scheduled to begin in 19762. Interstate 670 was partially complete when funding shortfalls curtailed construction. This left two gaps in the overall alignment: Interstate 71 to Port Columbus International Airport (CMH) and SR 315 (Exit 2B) to Grandview Avenue (Exit 1). The airport connection opened in 1993 and the Grandview connection by June of 2002, both of which added to the overall $175 million costs to construct Interstate 670.1

As part of the I-70/71 Columbus Crossroads Project, The Ohio Department of Transportation (ODOT) reconstructed the I-670 junction with Interstate 71 northeast of Downtown between September 18, 2011 and November 2013. Work resulted in 22 new bridges, two through lanes instead of one for the I-670 eastbound mainline that now stays to the left, and a shift of the Spring Street off-ramp from I-71 from the left to the right among other improvements. The project cost $200 million.5

The route of I-670 was originally designated as I-70N between I-70 at Valleyview (Exit 96) and Interstate 70A in Downtown Columbus. I-70A formed a loop along the Columbus Innerbelt utilizing SR 315 to the west, what is now I-670 to the north, and I-71 to the east. I-70N and I-70A were eliminated by the American Association of State Highway and Transportation Officials (AASHTO) on November 10, 1973. The same actions designated I-670 from I-70 at Valleyview east to Interstate 71, northeast of Downtown.

Delays for construction of I-670 west of SR 315 and east of Interstate 71 were complicated not only by funding issues, but also changes in environmental regulations. Work was to commence after the 1976 opening of the I-70/71 interchange southeast of Downtown. However a 1970 environmental shift in policy prevented the relocation of the Scotio River, a piece of the Interstate 670 overall project. The actions of the National Environmental Protection Act curtailed the project and forced planners to redesign the highway from scratch in 1978. From then until 1983, up to six alternatives were considered in conjunction with new environmental review processes. The final alignment was chose in 1984.1

Additional funding shortfalls arose in the late 1980s, curtailing the forward progress of the highway in conjunction with the overall complex design. It was not until 1993 that the first of the original 15 projects associated with Interstate 670 opened to traffic. By 1996 a financial recommitment by the City of Columbus and state transportation officials was agreed upon to countermand additional funding deficits. The agreement led for ODOT to take over construction and funding of Interstate 670 west of Neil Avenue and for the City of Columbus to cover the alignment east of Neil Avenue. The September 2003 opening of the aforementioned projects culminate the final two projects of the original 15 for Interstate 670. Additionally the alignment from I-70 to Grandview Avenue was reconstructed between June 2002 and July 2003.1

Coinciding with work on the final segments of Interstate 670, the older portion underwent extensive reconstruction. On March 30, 2002, I-670 between Third Street and Neil Avenue closed for 18 months for rehabilitation and expansion. The closure coincided with new construction of I-670 between SR 315 and Neil Avenue, an overall $75 million project. Included were aesthetic improvements such as iron fencing and decorative lighting.1 On September 19, 2003, I-670 officially opened to traffic and completing the Ohio Interstate system.3,4 AASHTO officially approved Interstate 670 on May 14, 2004, with concurrence by the Federal Highway Administration obtained on May 24, 2004. Interstate 70 advances two miles east from a folded diamond interchange (Exit 94) with Wilson Road  to the separation with I-670. Photo by Chris and Amber Lokken (06/23/08). Three lanes partition from the left side of I-70 east for Interstate 670 toward John Glenn Columbus International Airport (CMH) and the Columbus Beltway (I-270) at Gahanna. 10/01/10