Interstate 516 forms an urban loop encircling the city of Savannah from area around Hunter Army Airfield north to Garden City. Known as W.F. Lynes Parkway, the freeway doubles as SR 21, unsigned SR 421, and portions of U.S. 17 , U.S. 80 and SR 25. The south end ties into DeRenne Avenue, a congested commercial boulevard leading east into Midtown Savannah. Northern reaches of the freeway serve the Port of Savannah via connections with SR 26 Connector and SR 25.

Project DeRenne addresses congestion issues where Interstate 516 / Lynes Parkway transitions to DeRenne Avenue at Montgomery Street. Initiated by the city of Savannah in 2008, and the Draft Environmental Impact Statement (FEIS) was submitted to the Georgia Department of Transportation (GDOT) for review on January 15, 2021. The environmental review process was previously anticipated for completion in 2016, and then 2019.. The project involves extending the freeway end to a new partial dumbbell interchange with Montgomery Street, expanding Hampstead Avenue east from there into a multi lane boulevard, and reconfiguring DeRenne Avenue with access management, intersection improvements and raised medians. Construction was previously estimated to start in 2019 and now is in 2025. 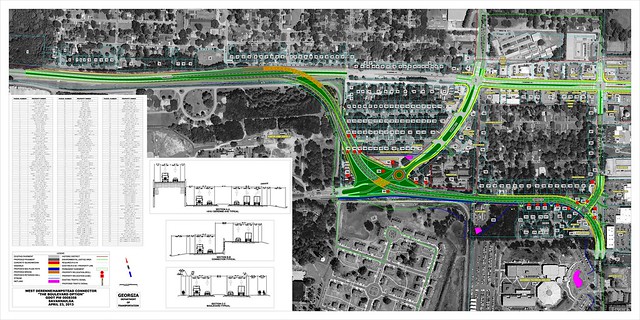 The initial portion of Lynes Parkway built was the 1967 extension of DeRenne Avenue west from Montgomery Street to ACL Boulevard. Work on the freeway progressed north from there to Interstate 16 by 1968 and Augusta Avenue by 1970. Completion of the route followed in 1983.1

Lynes Parkway was originally signed as SR Loop 26 (SR 26 is the state route designation for U.S. 80 through Savannah). SR 26 Loop was replaced with an extension of SR 21 south from Garden City to Savannah in 1979. Interstate designation for the route was approved by the American Association of State Highway and Transportation Officials (AASHTO) on December 7, 1984 under the Federal Highway Administration (FHWA) provisions of 23 U.S.C. 139(a) or (b).

Concurrent action by AASHTO approved the relocation of U.S. 17 and U.S. 80 onto overlaps with Interstate 516. U.S. 80 was relocated off Bay Street and southward along Lynes Parkway to Ogeechee Road. U.S. 17 was dropped from Mills Lane east, Victory Drive / Ogeechee Road west, and the couplet of Broad / Montgomery Streets and relocated to bypass Savannah along I-516 north to Garden City. U.S. 17 was again realigned in 1994, shifting from the alignment northwest to Port Wentworth and the Houlihan Bridge spanning the Savannah River onto I-16/SR 404 Spur east from I-516 to the Talmadge Bridge and Hutchinson Island.

The 1999 Georgia Department of Transportation exit renumbering project assigned exit numbers along Interstate 516 for the first time. The Interstate is signed with east and west cardinal direction banners and exit numbers increase from the southeast. The original route of U.S. 17 through Savannah separated the highway into north and southbound components along a combination of Ogeechee Road / Victory Drive / 52nd Street and the couplet of Broad and Montgomery Streets north to U.S. 80 on Bay Street. SR 26 Loop was envisioned as a full loop south of U.S. 80 in 1972. The route would take DeRenne Avenue east to La Roche Avenue and then follow a new alignment north back to U.S. 80 (Victory Drive) at Thunderbolt. A portion of this alignment was accomplished with construction of Truman Parkway.

U.S. 17 ran west from Savannah due to the tolled Eugene Talmadge Bridge across the Savannah River. Tolls were dropped on the cantilever span in 1975, and U.S. 17 was initially realigned onto I-516 in 1984 and then over the new Talmadge Bridge over what was U.S. 17 ALT in 1994. The speed limit reduces along eastbound Interstate 516 leading to Montgomery Street. A right in right out (RIRO) intersection here previously connected with Mildred Street south into an adjacent residential area. 07/25/22 A begin shield for Interstate 516 stands between Montgomery Street and the RIRO intersection for Mildred Street and the Tatemville neighborhood. 07/25/22 SR 25 continues north to the Port of Savannah while SR 21 extends northwest along Augusta Road, a busy arterial route seven miles to I-95. 07/25/22 Milepost seven for SR 21 coincides with the west end shield for Interstate 516 at the parclo interchange with Burnsed Boulevard (SR 26CO). 07/25/22 SR 21 (Augusta Road) transitions onto Interstate 516 beyond the intersection with Oak Street and just ahead of Exit 8 for SR 26CO and SR 25 (Burnsed Boulevard) north. 07/25/22