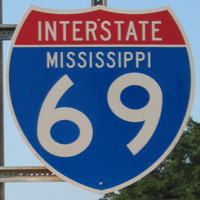 Interstate 69 in northern Mississippi travels east from the Tunica and De Soto County line along MS 713 near Tunica along a rural route to I-55 and the south end of I-269 near Hernando. I-69 combines with I-55 northward from I-269 to Memphis, Tennessee. This pair of Interstate shields was posted along the Interstate 55 mainline in early 2008. Photo taken by Jake Bear (07/14/08).

The first segment of Interstate 69 outside the original alignment between Indianapolis and Port Huron, opened to traffic in Mississippi on October 3, 2006.1 The freeway splits with MS 304 near the west end to head southward and end at the county line just north of the MS 713 intersection with the MS 304 Scenic Loop. MS 304, while not a part of the Interstate, provides a freeway connection west directly to U.S. 61 near Harrah’s Parkway.

On May 6, 2008, the Interstate 69 designation was extended north on shared alignments with I-55, I-240 and I-40 through Downtown Memphis to Tennessee State Route 300, after approval by AASHTO. Cosigning of I-69 with I-55 to the Tennessee state line is in place. North from there, Future corridor signs take the place of conventional shielding. Looking north from the Green River Road over crossing at the wye interchange that joins Interstate 69 & MS 713 with MS 304 prior to opening. Photo taken by Robert Lee (10/08/06).