I-985 is the second highest numbered Interstate in the system, with only I-990 outside Buffalo, New York numbered higher. Interstate 985 both acts as a commuter freeway joining the Atlanta metropolitan area with Lake Lanier and the city of Gainesville and a part of a long distance route for U.S. 23 to the north Georgia mountains. Although still rural in appearance, suburban growth adds traffic to the route with some sections more urbanized in design. 70 mile per hour speed limits are posted throughout the 24 mile long route.

All of Interstate 985 doubles as both SR 365 and unsigned SR 419. U.S. 23 accompanies the route from Exit 4 northeast to the Interstate end at U.S. 129 on the east side of Gainesville. U.S. 23 extends northeast from there as an expressway toward Clarkesville and Toccoa.

Construction to extend the I-85 Express Lanes northeast from Old Peachtree Road to Hamilton Mill Road expanded the wye interchange with I-985 to include an Express Lane overpass. Provisions were made to the southbound overpass for I-85 to accommodate future expansion of I-985. The $178 million project started on August 3, 2016. Work extended through Summer 2018.4

I-985 was approved as an Interstate Highway by the American Association of State Highway and Transportation Officials (AASHTO) on December 7, 1984. The freeway was previously constructed between August 1962 and December 1969 as a new alignment for U.S. 23.1 The highway was built instead of Interstate 85, which shifted southward in 1959 from a proposed route by Gainesville, Cornelia and Toccoa to an alignment east from Suwanee to Commerce and Lavonia. Efforts by Governor Ernest Vandiver resulted in the corridor shift for I-85, which ran through Franklin County, his home area.3

According to Steve Williams, until 1985 the freeway was simply known as State Route 365, despite the merge of U.S. 23 from the first exit (SR 20 – former Exit 1). Once the limited access portion ends in Gainesville, the highway is signed as U.S. 23/SR 365 to Cornelia. SR 365 eventually splits north of Cornelia, joining SR 17 and U.S. 123 as it goes through Toccoa en route to the South Carolina line. Locals started referring to the limited access portion as “985” once it was signed accordingly.

Work completed in 1991 extended the four-lane corridor along SR 365 east from I-985 at Gainesville to Toccoa.3 Several large-scale subdivisions surround the area of the I-85/985 split to the east and west while the industrial section of Suwanee borders the wye interchange to the south. The Mall of Georgia lies between both freeways along SR 20 (Buford Drive). The I-985 freeway initially opened north to Georgia 20 (Buford Drive). The remainder opened in 1969 as Georgia State Route 365.

The north end of the freeway along SR 365 tied into Old Cornelia Highway, which was then both U.S. 23 and SR 13. Old Corelia Highway east from Gainesville today is unnumbered to SR 52, which remains along the route north toward Lula.

$74.6 million in construction at Oakwood included the construction of an interchange (Exit 17) with SR 13 (Atlanta Highway) and the addition of collector distributor roadways between it and adjacent Exit 16 with SR 53 (Mundy Mill Road). The work was completed between June 8, 2006 and July 31, 2009.2

A diamond interchange was constructed on Interstate 985 with H.F. Reed Industrial Parkway at Exit 14. The project extended H.F. Reed Industrial Parkway south from parallel Thurman Tanner Parkway across I-985/U.S. 23 to the intersection of SR 13 and Martin Road. The exchange cost $34 million to build, and it fully opened to traffic on January 30, 2020.5 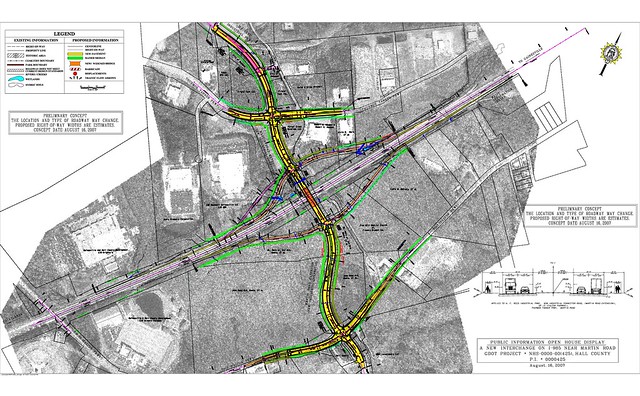 One half mile ahead of the diamond interchange (Exit 24) with U.S. 129 north and SR 369 west. U.S. 129 originally followed a combination of Green Street, Riverside Drive, Morningside Drive and Park Hill Drive before shifting onto a bypass of Gainesville to the east via I-985 and Limestone Parkway. 07/02/14 A pair of end signs for Interstate 985 were installed along Lanier Parkway northbound at the Old Cornelia Highway overpass in 2014. 07/02/14 U.S. 129 splits with I-985/U.S. 23 north to combine with SR 369 west to nearby Limestone Parkway. Limestone Parkway takes the highway north as a commercial arterial to outer reaches of Lake Lanier while en route to the White County seat of Cleveland. SR 369 combines with U.S. 129 Business south to Downtown Gainesville. 07/02/14 Spanning Jesse Jewell Parkway, Interstate 985 concludes with this set of end signs. U.S. 23/SR 365 transition into an expressway ahead of the intersection with Howard Road. 07/02/14 Running southwest along eastern reaches of Gainesville, the first reassurance marker for Interstate 985 south omits U.S. 23/129. U.S. 129 splits with the freeway at the ensuing exit. 10/26/15 Replaced guide signs incorrectly identified Exit 24 with U.S. 129 Business instead of the U.S. 129 mainline. A supplemental shield indicated U.S. 129 ahead of the exit gore point instead. 07/21/05 The Express Lane exit for Interstate 985 follows the diamond interchange (Exit 111) joining I-85 with SR 317 north and Lawrenceville-Suwanee Road. 10/22/15 Interstate 85 branches eastward from the wye interchange (Exit 113) with I-985 toward Braselton and Jefferson in adjacent Jackson County. I-985 stays to the north through the Buford area. Both freeways are commuter routes through north Gwinnett County. 07/02/14 Part of a 22 mile route to the Hall County seat of Gainesville, Interstate 985 leads north toward Buford Dam and Lake Lanier Islands. I-85 north reaches the South Carolina state line in 66 miles. 07/02/14