Well known by name, Interstate 495 along the Capital Beltway encircles the Washington, D.C. metropolitan area. A heavily traveled commuter route, I-495 connects a number of suburban communities across both Northern Virginia, Montgomery County and Prince Georges County, Maryland. The beltway also passes by several government sites including Joint Base Andrews, NASA Goddard Space Flight Center and the U.S. Food and Drug Administration among others.

Interstate 495 serves regional traffic with several routes radiating outward from the Capital Beltway and D.C. area. They include I-66 west to Front Royal, I-95 south to Richmond, U.S. 50 east to the Chesapeake Bay Bridge, I-95 and Baltimore-Washington Parkway north to Baltimore and I-270 west to Frederick. Express toll lanes accompany the I-495 leg of the Capital Beltway north from Springfield to Tysons Corner.

Interstate 495 was constructed in the 1960s and fully opened to traffic in Virginia by April 1964 and in Maryland on August 17, 1964.1 Expansion occurred several times through the decades. A systems interchange was completed in 2006 at the crossroads where the Capital Beltway, I-95 and I-395 (Shirley Highway) converge at Springfield.

When Interstate 95 was deleted from within the beltway in 1977, that designation wholly replaced I-495 on the eastern half of the beltway. This was formally approved by the American Association of State Highway and Transportation Officials (AASHTO) on November 15, 1975. However in 1989, the Interstate 495 designation was restored along the eastern beltway to provide a consistent number for its entire length. AASHTO affirmed this at the route numbering committee meeting on June 10, 1991. As a result of this action by AASHTO, the eastern half of the Capital Beltway is signed as both I-95 and I-495. The FHWA Interstate Route Log and Finder list attributes the overlapped mileage solely to Interstate 95.

Built in 1961, the Woodrow Wilson Bridge spanning the Potomac River was the only bridge in the Interstate Highway System maintained by the Federal Highway Administration. The draw bridge between Alexandria, Virginia and Oxon Hill, Maryland was replaced by a massive construction project underway from May 2001 to 2009. Work included the demolition of the original bridges, construction of new spans at a height 20 feet above their predecessors and interchange upgrades on both sides of the river. Operated by state agencies for Maryland and Virginia and the District of Columbia, the new Woodrow Wilson Bridge carries four roadways in a local and express configuration with a 70 foot draw span. Express/local roadways lead east beyond MD 210 (Indian Head Highway) and west to Telegraph Road. Work at area interchanges continued through early 2013 at Telegraph Road in Virginia.

Major work broke ground in 2008 on Interstate 495 between Springfield and McLean, Virginia. Costing $2 billion and funded by private companies Transurban and Fleur,2 the 495 Express Lanes project rebuilt the Capital Beltway with High Occupancy Toll (HO/T) lanes added between the north and south roadways. Extending 14 miles north from the Springfield Interchange with I-95/395 to a point south of SR 193 at McLean, the 495 Express Lanes opened to traffic on November 17, 2012.

The 495 Express Lanes accommodate two lanes per direction with ramps independent of the I-495 general travel lanes. All electronic toll (AET) gantries collect tolls with E-ZPass and other interoperable transponders. Congestion pricing adjusts toll rates based upon the time of day and traffic congestion. HOV-3 eligible motorists with an E-ZPass Flex transponder can use the Express Lanes free of charge. Former overhead signs for I-395 and I-95 north on Interstate 495 east. The merge with I-95 northbound was numbered Exit 4A in the old sequential numbering system. 05/27/95 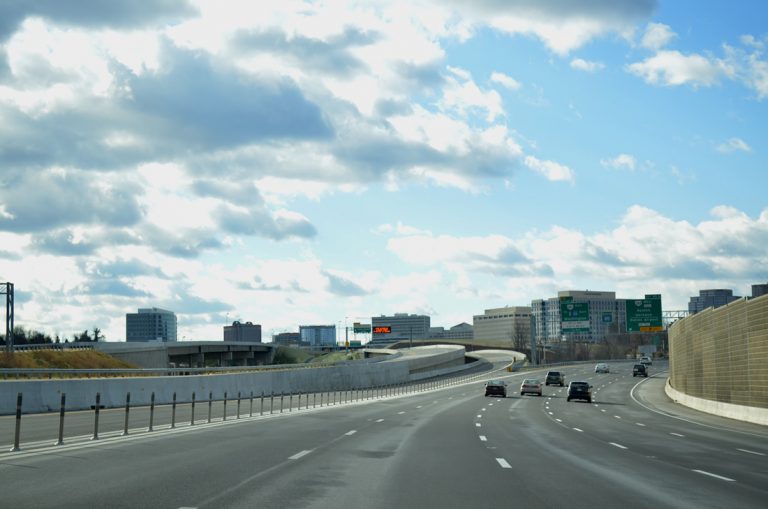 I-95/495 one half mile before their split at College Park. I-95 continues with three lanes north toward Baltimore while I-495 maintains eight overall lanes through the exchange. Photo by Jim K. Georges (07/99). Interstate 95 heads south from Beltsville to the Capital Beltway west of U.S. 1 at College Park. 08/04/13 The I-95 southbound mainline merges onto the left side of I-495 east through the adjacent cloverleaf interchange with U.S. 1 at College Park. 08/04/13 Cherry Hill Road passes over Interstate 95 south as the freeway separates into ramps for the Capital Beltway. 08/04/13 Two lanes depart for I-95/495 south to Greenbelt, Glenarden and Oxon Hill on the east side of Washington, DC. Two lanes also continue onto I-495 west to Silver Spring, Bethesda and the American Legion Memorial Bridge into Northern Virginia. 08/04/13 Following the ramp for I-495 west, traffic again splits with a single lane continuing south to a weigh station, carpool lot, and an return ramp to the Capital Beltway inner loop ahead of U.S. 1 at College Park. The left exit utilizes the I-95 stub constructed for the canceled route through Washington. 08/04/13 All trucks are directed to Exit 27 when the weigh station at the south end of the I-95 stub is in operation. The ramp departs from the right also to an adjacent carpool lot. 12/21/12 An ingress point to the 395 Express Lanes north to Arlington departs from I-95 just ahead of the separation with ramps for I-495 north to Tysons Corner and I-95/495 east to the Woodrow Wilson Bridge. 12/16/16 The Henry G. Shirley Memorial Highway transitions from I-95 north to I-395 as Exit 170A while a flyover (Exit 170B) departs for I-495 north to Tysons Corner. Interstate 495 partitions with the Express Lanes just west of the Springfield Interchange. 12/16/16 Two lanes follow from the Capital Beltway eastbound for Interstate 395 north into Washington at Exit 57B. 12/16/16 Interstate 95 south leaves the Capital Beltway along a two lane flyover toward Franconia, Fredericksburg and Richmond while I-495 continues west to I-395 north into Arlington. 08/04/13 A second left exit ramp joins the Capital Beltway inner loop with the I-95 Express Lanes south to Stafford and I-395 Express Lanes north through Alexandria. The I-495 Express Lanes commence westbound just beyond the Springfield Interchange. 08/04/13