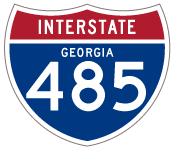 The proposed route of Georgia State Route 410 in 1967 ran east from I-75/85 past Inman Park and Druid Hills in Atlanta and northward around Decatur.

With the Stone Mountain Freeway canceled west of Lawrenceville Highway, I-485 was reconsidered as a connector between I-75/85 at Downtown Atlanta and the proposed SR 400 freeway extending north from Interstate 675 in DeKalb County. SR 400 south to I-285 was eventually dropped along with the western SR 410 corridor for I-485.

The American Association of State Highway and Transportation Officials (AASHTO) approved the northeasterly loop of Interstate 485 between the Downtown Connector and I-85 near Lenox Road on June 30, 1970. Following community opposition to the freeway, the route was subsequently eliminated by AASHTO on June 17, 1975. The Georgia Department of Transportation (GDOT) request to the Federal Highway Administration (FHWA) to withdraw I-485 from the Interstate System coincided with a request for the substitution of alternate Interstate Routes in the state in accordance with the provisions of 23 U.S.C. 103(e)(2):

The short freeway spur east from the high speed interchange with I-75/85 to Howell Street was the only section of I-485 ever constructed. It was later renumbered as SR 410, and then ultimately as part of SR 10.

Construction of John Lewis Freedom Parkway (SR 10 / SR 42 Spur) in the early to mid 1990s utilized a portion of the former I-485 right of away. The ramps from Boulevard west to I-485 and from I-485 east to Howell Street were removed. The overpass at Boulevard was replaced with a signalized intersection as well. The at-grade, controlled access parkway links with the Jimmy Carter Presidential Library and Museum, U.S. 23 (Moreland Avenue) and U.S. 278 (Ponce De Leon Avenue).

Source: Correspondence from the Georgia Department of Transportation (GDOT) to the Federal Highway Administration (FHWA), May 9, 1975. I-485 shields were dropped from the Georgia Official Highway map by 1976, but the planned route north to I-85 and east toward Clarkston remained as state routes. However neither of these freeways, nor the eastern extension of SR 166, were ever built.

Road maps through the 1970s displayed Interstate 485 on the short SR 10 freeway spur between the Downtown Connector and Boulevard as part of its planned loop northward through Atlanta. This proposal for I-485 would have tied into an extension of SR 400 projected southward from I-85 to I-75 at Stockbridge. Only the Interstate 675 portion from southwest Dekalb to Clayton Counties was built. An early proposal for Georgia State Route 410 linking Downtown Atlanta with the Stone Mountain Freeway in 1967. Exit 248C partitions into a high speed ramp for SR 10 (John Lewis Freedom Parkway) east and an at grade intersection with the ramp from Ellis Street eastbound for Andrew Young International Boulevard. 08/22/03 Taken down in 2016 during construction to expand the intersection with Boulevard, an end shield for SR 10 stood just ahead of Jackson Street. 08/22/03 SR 10 (John Lewis Freedom Parkway) partitions into ramps for I-75/85 south for Macon and Montgomery and north for Chattanooga, Greenville. The Jackson Street overpass is the lone portion of I-485 remaining beyond the approaching systems interchange. 08/22/03 The northbound ramp for the Downtown Connector (I-75/85) splits with Andrew Young International Boulevard west to Centennial Olympic Park and the George World Congress Center. 08/22/03