Interstate 395 shares a brief overlap with U.S. 202 between Exits 2 and 3 south of Downtown Bangor. The western end connects with U.S. 2 and Route 109.

The northernmost branch of I-95, Interstate 395 constitutes a cross town route from Bangor International Airport (BGR), U.S. 2 (Hammond Street) and Interstate 95 east to Brewer and U.S. 1A (Wilson Street). The freeway provides access to Downtown Bangor and the Brewer city center in addition to a trucking corridor east to U.S. 1A and Maine 9.

A study was conducted in 1997 by MaineDOT and the Maine State Planning Office (SPO) for the development of an east-west roadway across the state to link the Canadian Maritime Provinces with the trade markets of Quebec and Ontario. Results of the "A Technical Report on An East-West Highway in Maine" were announced by Governor Angus King on October 6, 1999. They outlined a four-part strategy for improving the east-west link in Maine. Part 2 of the report identified a new limited-access roadway connecting Interstate 395 in Brewer with Maine 9 in the Eddington area. MaineDOT followed with preparation of an environmental assessment (EA) for the I-395/Route 9 Study in 2000.1

The I-395/Route 9 Transportation Study EA transitioned into a full environmental impact statement on October 11, 2005 due to potential wetland impacts. A Draft Environmental Impact Statement was released for the proposed route in March 2012. It included four alternatives including a no-build option. MaineDOT and the FHWA identified Alternative 2B-2 as the Preferred Alternative. 2B-2 consists of a route running northeast from a reconfigured interchange with U.S. 1A (Wilson Street) along the Bangor Hydro-Electric Company utility easement to Route 9 at a T intersection west of Chemo Pond Road. The connector outlines a controlled access highway with two lanes built within a 200 foot right of way.1 The corridor includes bridges Eastern Avenue and Mann Hill Road over the connector and underpasses for Lambert Road and Levenseller Road. No access points between U.S. 1A and Maine 9 are included in the alternative.2

The I-395/Route 9 connector aims to reduce truck traffic in Brewer, provide a bypass for Maine 9 traffic around Downtown Brewer and Bangor and improve traffic safety. Estimated to cost $61 million, the I-395/Route 9 connector moved forward during the Bangor Area Comprehensive Transportation System meeting held on March 26, 2016. Approval given a new three-year plan provides $250,000 to prepare preliminary engineering and right of way documents from the $57 million in regional road project funding. Opponents to the connector, including Brewer City Council, Holden Town Council and some community leaders and residents of Eddington, continued to voice opposition to the route.2

Interstate 395 in Maine is part of High Priority Corridor 50: East-West Corridor from Watertown to Calais in its entirety. Interstate 395 originally ended at a trumpet interchange with U.S. 1A & Maine 9 (Main Street) on the south side of Bangor. 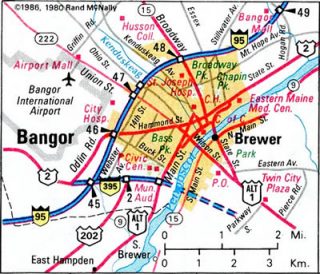 Completion of I-395 across the Penobscot River preceded the relocation of SR 15 to bypass Downtown Bangor. The former route along Broadway became SR 15 Business.

Interstate 395, also known as the “Bangor Industrial Spur,” was opened in stages. The first section opened between Main Street to Odlin Road in 1959. The extension from Bangor to Brewer opened to traffic in 1986.2