Traveling 76 miles overall, Interstate 390 follows the Genesee Expressway north from the Southern Tier Region of Upstate New York to Rochester’s Outer Loop in the town of Brighton. The scenic freeway winds northwest from Avoca to Dansville, Geneseo and Avon through agricultural land and hilly terrain. North from the Finger Lakes area, I-390 continues to suburban areas of Monroe County, carrying commuters north from West Henrietta to the city of Rochester. 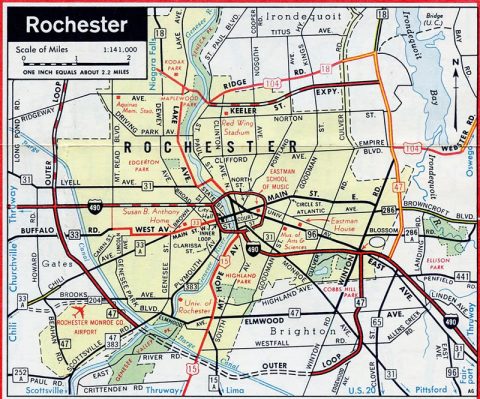 The Rochester Outer Loop designated as New York Route 47 in 1968.

The Rochester Outer Loop was originally designated New York Route 47. The freeway opened to traffic from the west and east, with the last section south of I-490 joining the two sections where the Genesee Expressway ties in from the south. The oldest segment of I-390 south of Rochester was the Dansville-Wayland Expressway. Built in the late 1960s,1 the short freeway linking NY 21 and NY 36 was numbered as NY 401, then NY 245.2

As construction progressed along both the Genesee Expressway and Outer Loop, the separate segments of state route freeway were incorporated into the Interstate system. Interstate 590 replaced NY 47 in Monroe County and NY 245 became part of I-390 in Livingston County. The remainder of I-390 was completed slowly over the course of 20 years, with the last section opened between NY 15 at Avoca and I-590 in 1981. Some New York State Department of Transportation (NYSDOT) reference markers around Dansville still referenced NY 245 as of January 2017.

Within Rochester, initial plans for Interstate 390 took the freeway north from the Rochester Outer Loop (I-590) directly to the Rochester Inner Loop (I-490). The proposed alignment of I-390 followed the Genesee River northward from a portion of the University of Rochester campus to neighborhood areas south of central business district. While ramps to the Genesee Expressway were added from the Inner Loop at Downtown, growing community opposition halted additional construction.3

Ultimately the Genesee Expressway project was dropped, with I-390 rerouted over the southwest leg of the Outer Loop in place of I-590. The American Association of State Highway and Transportation Officials (AASHTO) approved the renumbering of Interstate 590 west from the Genesee Expressway to I-490 as I-390 on June 25, 1979. The Outer Loop between NY 383 and Winton Road was finished in December 1980, followed by completion of the route from NY 104 to Lake Ontario State Parkway in 1984.  The action included designating the previously unnumbered Outer Loop north to Lake Ontario State Parkway as part of Interstate 390. Despite that, the freeway north of I-490 was instead signed as New York Route 390.

Started in 2016, the I-390/I-490 Interchange Improvement Project made a number of improvements at the exchange joining I-490 with I-390/NY 390 at the town of Gates. Completed in Summer 2018, work on Phase One replaced the NY 31 (Lyell Avenue) bridge over NY 390 with a wider span. Phase Two work through late 2019 rehabilitated bridges along NY 390 over Erie Canal, realigned the entrance ramp from NY 31 onto NY 390 northbound, and added lane capacity. Phase Three constructed a new roadway for NY 390/I-390 southbound through the exchange with I-490. Opened to traffic on September 17, 2021, the flyover eliminated left exit ramps by repurposing the former roadway for NY 390/I-390 south into a collector distributor roadway. Completed by the end of 2021, Phase Four construction widened NY 31 (Lyell Avenue) between NY 390 and Howard Road.4 The $172.8 million project garnered recognition by the American Public Works Association for Transportation Projects Greater on March 25, 2022.5 Left Exit 9 B separates from I-490 a half mile west of the Rochester & Southern Railroad overpass for the Rochester Outer Loop south to Greater Rochester International Airport (ROC). 08/22/21 Heading northwest from ROC Airport, Interstate 390 travels under a CSX Railroad and east of the Dolomite Quarry, ahead of Exit 20 A for I-490 east to Downtown Rochester and Exit 20 B for I-490 west toward Ogden and Spencerport. 05/10/05 Interstate 490 (Western Expressway) bee lines three miles east from I-390 through the Dutchtown neighborhood of Rochester to the Inner Loop Expressway encircling the central business district. 05/10/05 Left Exit 20 B departs to Interstate 490 west for Brockport, Spencerport and the New York Thruway to Buffalo. The Rochester Outer Loop extends north along NY 390 to Lake Ontario State Parkway near Crescent Beach. 05/10/05 The Rochester Outer Loop continues the sequential exit number system for I-390 along NY 390. Exit 21 joins the freeway with NY 31 (Lyell Avenue) to the immediate north of Exit 20 for I-490. Lyell Avenue constitutes a commercial arterial east into the Lyell-Otis-Avery neighborhood of Rochester. 05/10/05 Advancing east from the three-wye interchange with NY 531 (Spencerport Expressway), Interstate 490 east expands to three lanes ahead of Exits 9 A/B with the Rochester Outer Loop.
This button copy guide sign for I-390 was replaced by 2011. 05/10/15 The succeeding exit joins I-490 east with NY 390 to North Gates, Greece and Lake Ontario State Parkway. The western half of the Outer Loop is a full freeway, while the eastern half is not as a portion of the Sea Breeze Expressway was downgraded to an at-grade boulevard (Sea Breeze Drive). 05/10/15 The roadways of Interstate 490 separate to accommodate left exit ramps with the Outer Loop. Airport is the initial control point for I-390 south at Exit 9 B. Corning is used at the exchange with Interstate 590. 05/10/15 Construction during the Western Gateway Project slowed traffic along westbound I-490 leading to Interstate 390. Remaining button copy guide signs along the Western Expressway were replaced during the multi year project. 05/10/05 Sign changes made as part of the I-390/I-490 Interchange Improvement Project replaced all overheads for Exit 9 west from Mt. Read Boulevard with APL’s. 01/18/17 Overheads on the Rochester & Southern Railroad overpass were replaced with a sign bridge. 01/18/17 With the exception of a left exit tab for Interstate 390 south, overheads on I-490 west at the Outer Loop were carbon copied by 2012. I-390 concludes at Interstate 86 (Southern Tier Expressway) just southeast of the village of Avoca in rural Steuben County. Dropping both NY 15 and NY 17, all guide signs for this rural exchange were replaced by 2012. 01/18/17 Interstate 390 south defaults onto I-86 (Southern Tier Expressway) east ahead of Bath. The rural freeway waves alongside the Cohocton River southeast 24 miles to Interstate 99 at Painted Post. 01/18/17 A pair of end shields stand along Interstate 390 south by the overpassing carrying I-86 (Southern Tier Expressway) westbound. NY 15 formerly overlapped with NY 17 east to Painted Post, where U.S. 15 begins south to Presho and Mansfield, Pennsylvania. 01/18/17

The entrance ramp from NY 53 forms an auxiliary lane west from Fivemile Creek a third of a mile to the modified trumpet interchange with Interstate 390 north. 07/01/05

The rural route of I-86 and the Southern Tier Expressway (NY 17) serves the small cities of Olean and Jamestown along the 153 mile course west to Interstate 90 in Pennsylvania. Olean, 66.3 miles away, lies at the west end of NY 417, which formerly carried NY 17 from Erwins. 07/01/05 A 6.7 mile exit less stretch takes motorists along I-86 (Southern Tier Expressway) east from Howard to the south end of Interstate 390 in the town of Avoca. 08/23/21