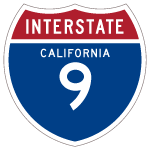 California 99, the Golden State Freeway, follows the original U.S. 99 corridor avoided by Interstate 5 through the Central Valley region. Converted in stages from the 1940s today from a two-lane farm road into today’s four to eight-lane freeway, the final at-grade intersections along California 99 between Wheeler Ridge and Stockton were eliminated, creating a continuous freeway corridor through the Central Valley. With the removal of these at-grade intersections (completed with the interchanges between Chowchilla and Merced by 2016), the next step in the improvement of California 99 is to bring it to full Interstate-standard freeway status. To that end, politicians in the Central Valley have crafted a resolution that would request adding California 99 from Mettler to Sacramento into the Interstate Highway System.1,2

California 99 has been considered for inclusion in the Interstate Highway System three times:7

For a route to be designated as part of the Interstate Highway System, the route must meet several basic criteria (per Assembly Bill Analysis of AJR 63):3

California 99, which follows historic U.S. 99, connects the major cities of the Central Valley, including Bakersfield, Visalia, Fresno, Merced, Madera, Modesto, Manteca, Stockton, Lodi, and Sacramento. All of these cities, excepting Stockton and Sacramento, are avoided by Interstate 5.

Due to the age of California 99, the highway was built to Interstate standards in newer sections, but older sections retained several deficiencies requiring improvement according to Caltrans, including:3

A full list of the deficiencies can be found at the Caltrans Interstate 99 Designation Issues web site. Potential interchange closures to address the spacing issues are outlined here.

According to the legislative analysis, “SCR 17 (Costa), Resolution Chapter 84, Statutes of 2001, requests the Department of Transportation (Caltrans) to report by January 1, 2002 to the Legislature on ways to improve traffic congestion and transport on SR 99 between Bakersfield and Sacramento. The report was completed and included several recommendations for improvements to SR 99. The report also identified $675 million worth of rehabilitation, operation and safety improvements that were necessary for the corridor.” Not considered in this cost is the re-signing of California 99 as Interstate 9.

In early 2004, Fresno Mayor Alan Autry and Fresno County Supervisor Bob Waterston brought the idea forward to make California 99 into a toll road. The two officials planned for toll booths at either end of the route through the Central Valley (probably just north of the Grapevine and somewhere near Sacramento), and the tolls would provide funding for needed upgrades along California 99. In a Fresno Bee article, Waterston commented about tolls: “When you bring this up to people, first of all there’s a shock, and then it’s ‘Why not?’ You know, they do it in Connecticut.” 6 It is not clear whether this proposal was vetted through the Fresno County Council of Governments or with other regional planning agencies in the Central Valley. A toll road remains a possibility, but it is not at the forefront of possible solutions.

Source: estimate based upon Google Maps 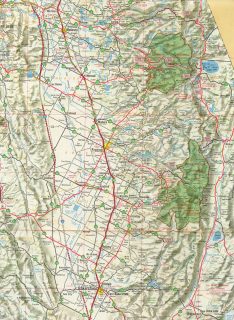 California 99 was the main route between the Grapevine and Stockton prior to completion of Interstate 5. I-5 was fully completed between the SR 99 split and SR 4 in Stokcton on September 30, 1972. The California 99 freeway north from Stockton doubled as Temporary Interstate 5 until 1979, when the last sections of I-5 opened to traffic from north of Stockton to near Elk Grove.

Much of this activity began in the city of Fresno, often referred to as the largest city in the country not served by an Interstate highway. Interstate 66, proposed in 1991 as a new east-west, cross-country Interstate corridor, was the first course of action for Fresno politicians to bring the city onto the Interstate Highway System. However, Interstate 66 would have traveled over the Sierra Nevada Mountains, perhaps via Kings Canyon and/or Sequoia National Parks to enter Fresno via California 180. Environmental concerns seemed to outweigh the benefit of Interstate 66, so the concept of this route gained little momentum in Fresno. By Fall 2004, Interstate 66 was actively planned for construction in Kentucky but virtually nowhere else. However, Fresno politicians continued in their quest to bring Fresno into the Interstate Highway System by looking at other avenues, specifically, the California 99 freeway.

On June 11, 2003, the “California Report” segment on KQED, San Francisco’s National Public Radio station, indicated that there is a strong desire in Fresno to put the city onto the Interstate Highway System.4 Fresno is the largest city in the United States not served by a single Interstate Highway, and there is a sense of prestige that would be created by converting California 99 into an Interstate. Although local politicians support such a new Interstate, there is a cost associated with converting the highway to Interstate standards and changing the signs. One of these politicians was Assemblyman Bill Maze, who brought the issue to the California legislature in July 2004.

At that time, Assemblyman Maze crafted Assembly Joint Resolution (AJR) 63, “Relative to State Highway Route 99,” a measure that would memorialize the intent of the legislature of California (Assembly and Senate) to advise the President and Congress of the United States a request that they “enact legislation to include State Highway Route 99 in the Interstate Highway System.” 1 The resolution was adopted by both houses of state government and filed with the California Secretary of State on August 19, 2004. Notably, the resolution requests either (1) the federal government exempts California 99 from fulfilling Interstate standards or (2) the state of California is exempted from financing any costs to upgrade California 99 to federal Interstate requirements.

In the resolution, Maze listed a variety of reasons why California 99 ought to be incorporated into the Interstate Highway System:1

The effort to bring a second north-south Interstate to the Central Valley was almost derailed by State Senator Dean Florez, who considers California 99 a historic corridor that needs some preservation. Florez pulled AJR 63 from the consent agenda of the Senate, and it was initially denied in July 2004.2 Senator Florez and Assemblyman Maze negotiated, and they agreed to add the following language: “State Highway Route 99 is granted a historic designation of ‘Historic Route 99.'” In addition, the two agreed to the language that supports an exemption to requirements that California 99 meet Interstate standards.1

Notably, the California 99 designation would almost certainly have to change. As noted in the legislative analysis of AJR 63, the Federal Highway Administration (FHWA) has a “formal policy for the signing and number of future interstate corridors. The number of future IHS routes must be coordinated with the states and approved by the American Association of State Highway and Transportation Officials and FHWA. The designation of ‘Interstate 99’ is currently being used by the state of Pennsylvania, which means that California more than likely would have to renumber SR 99.”

On August 10, 2005, the SAFETEA-LU added California 99 from Interstate 5 south of Bakersfield north to Sacramento as High Priority Corridor 54.5 In addition, SAFETEA-LU designated California 99 officially as a future Interstate corridor, although it did not specify a numerical designation. SAFETEA-LU authorized a higher priority (yet unspecified amount) for funding general improvements to California 99 since it is a future Interstate corridor, but the appropriations package included several specific earmarks for the route. It is unclear how this action will impact the state’s plans for the route.

The north end of Interstate 9 was proposed to tie into the multi-level interchange joining Interstate 5 and California 4 (Ort J. Lofthus / Crosstown Freeway) in the city of Stockton.

Another potential location for the northern terminus of Interstate 9 is the exchange connecting Business Loop I-80 (Capital City Freeway) and U.S. 50 in Sacramento.

Representing the south end of what could be Interstate 9, California 99 separates from Interstate 5 north at a wye interchange (Exit 221) between Wheeler Ridge and Mettler.